Blue Origin NS-19 Mission: Who Will Jeff Bezos Bring in a Suborbital Flight Next Month?

Jeff Bezos said that Blue Origin would send a complete crew of six individuals to the edge of space for its NS-19 mission next month. The launch is set for December 9 at 10 a.m. ET in Van Horn, Texas, with Blue Origin's webcast beginning 90 minutes early. 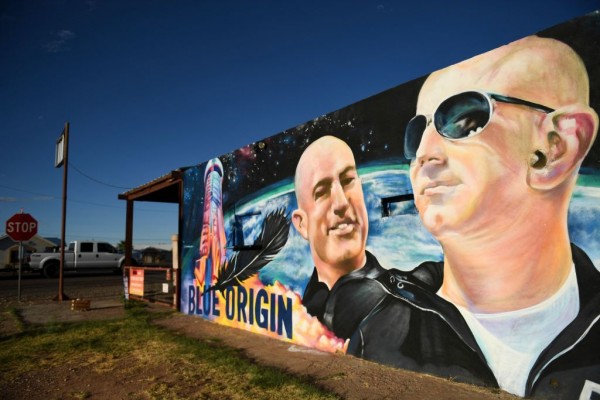 (Photo: PATRICK T. FALLON/AFP via Getty Images)
TOPSHOT - A pickup truck drives past a mural of billionaire Amazon founder Jeff Bezos (R) and his brother Mark Bezos with a Blue Origin rocket in Van Horn, Texas on October 11, 2021. - Blue Origin is scheduled to launch the New Shepard NS-18 mission to space with passengers including actor William Shatner on October 13 from West Texas, near Van Horn.

The New York Post said Blue Origin also issued a list of its new NS-19 crew members, chosen from a group of people, including some celebrities, who will fly in a suborbital flight next month.

Laura Shepard Churchley, the eldest daughter of Alan Shepard, the first American in space, would honor the crew. GMA co-anchor and former NFL player Michael Strahan, Voyager Space CEO Dylan Taylor, Evan Dick, Lane Bess, and Cameron Bess will join, too. Blue Origin said Lane and Cameron would be the first parent-child pair to fly in space in a release.

The voyage has already been scheduled, and the crew members are gearing up to prepare for the impending mission, which will be their first in space.

Blue Origin's next trip is scheduled for next month, and it will take these soon-to-be astronauts to space and back to Earth. The trip will also benefit nonprofits such as Club for the Future, which encourages youngsters to pursue STEM careers, and The Boys and Girls Club, to which Strahan will contribute his honorarium.

According to CNN, New Shepard's suborbital battles reach speeds of around three times the speed of sound - around 2,300 miles per hour - then fly straight up until the rocket's fuel runs out. At the top of the trajectory, the crew capsule will detach from the rocket and short continue higher before practically hovering at the top of its flight path, offering the passengers a few minutes of weightlessness.

The suborbital flights are not the same as the orbital trips that most of us envision when we think about spaceflight. Blue Origin's New Shepard missions will be short, up-and-down journeys, but they will travel more than 62 miles above Earth, which is usually regarded as the boundary of space.

The suborbital flight needs far less power and speed. That implies the rocket will fire for less time, the outside of the spaceship will be scorched less, there will be less force and compression ripping at the spacecraft, and there will be less potential for things to go wrong.

Orbital rockets must provide enough thrust to reach a speed of at least 17,000 miles per hour, orbital velocity, allowing a spacecraft to continue spinning around the Earth rather than being drawn back down by gravity.