Jeff Bezos set aside $1 billion in Amazon shares each year to support his Blue Origin rocket firm, but he claims he's spending more of his riches on climate change than on space flight.

The billionaire made the remarks while in Washington, D.C., for the Ignatius Forum. The Blue Origin CEO was questioned about the top priority that people should concentrate on.

Daily Star said Jeff Bezos had been strongly chastised for spending billions of dollars on establishing a space tourism enterprise when there are many challenges on Earth, including climate change. 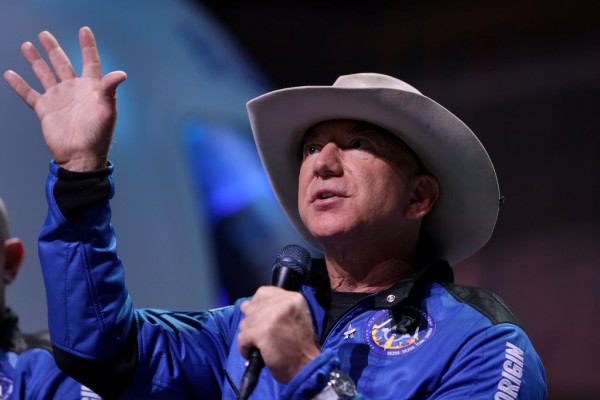 (Photo: Getty Images)
VAN HORN, TEXAS - JULY 20: Jeff Bezos speaks about his flight on Blue Origin’s New Shepard into space during a press conference on July 20, 2021, in Van Horn, Texas. Mr. Bezos and the crew that flew with him were the first human spaceflight for the company. (Photo by Joe Raedle/Getty Images)

Bezos, the founder of Amazon and CEO of Blue Origin, has reacted to critics who claim that billionaires spend too much money on space travel while not solving issues on the ground.

He told Harvard Business Review editor-in-chief, Adi Ignatius, at the Ignatius Forum on Thursday that these critiques overlook the reality that "we need to do both." He added that the two are inextricably linked.

Bezos admitted that there is "a lot to be done" on Earth but said humanity must also look to developing resources on other planets to "keep evolving as a society."

Bezos also discussed the necessity of space flight, noting that a "tremendous amount" can be done right now. He stated that everyone must consider the future.

Bezos has previously stated in an MSNBC report that mankind will be forced to send "all polluting industries" into space.

In 2020, Bezos announced the creation of the $10 billion Earth Fund, which would provide grants to scientists, campaigners, and other groups fighting to combat climate change. CNBC said the fund had distributed $947 million, intending to issue the entire $9 billion by 2030.

The Bezos Earth Fund is a commitment by the former Amazon CEO to safeguarding and assisting the Earth in its repair and preservation now to achieve more and thrive in the future.

After stepping down as CEO of Amazon in July, Bezos focuses his efforts on personal projects such as the Earth Fund and Blue Origin, and The Washington Post, which he bought in 2013.

Jeff Bezos and His Other Ventures

Blue Origin is selling tickets on its next trips onboard the New Shepard, which will take passengers to new and greater heights previously only seen by a select few.

One of the world's wealthiest people is recognized for his numerous initiatives and accomplishments throughout the years, which has made him famous on several occasions. Bezos departed Amazon early this year, but that does not mean he is retiring forever. He is already planning his next adventure, which involves going to space.

The firm aims to land partnerships and projects with space organizations such as NASA. However, this has not been the case since the corporation has instead been involved in legal issues.

RELATED ARTICLE: Blue Origin's Jeff Bezos Predicts Earth Will Be a 'Natural Resort' and Only Few Will Be Allowed To Stay