NASA-Funded Research Leads to the Development of Salt-Based Propellant 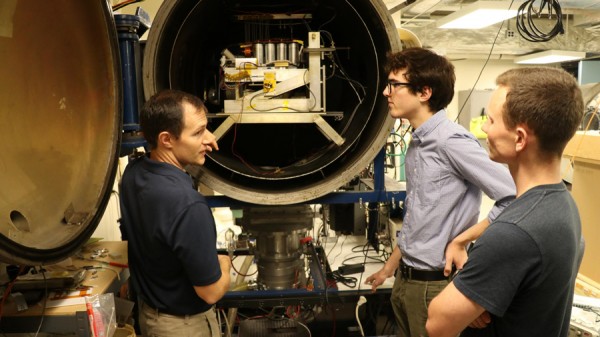 Earlier this year, a team of researchers from the University of Illinois have been awarded six million dollars' worth of funding from NASA for a three-year research called CHEETA—the Center for Cryogenic High-Efficiency Electrical Technologies for Aircraft. The research is geared towards the development of an all-electric aircraft.

As an update, just last month, the researchers have reported in an issue of Journal of Propulsion and Power that they were able to develop a new salt-based propellant, which can be strategically used for dual-mode rocket engines made for combustion and electrical propulsion. Convenience was considered as the fuel is made up of two commercially available salts–hydroxylammonium nitrate and emim ethylsulfate—that have been previously proven to function as combustion propellants.

This time, the research team has reported that the mixture of the two salts could be used in colloid propulsion or electrospray thrusters, which use electrostatic acceleration to produce tiny droplets of liquid propellant. University of Illinois Department of Aerospace Engineering in The Grainger College of Engineering associate professor, Joshua Rovey, explained that this is done by applying a strong electric field at the tip of narrow capillaries, where very small quantities of liquid are fed. This will then cause the ejection of the propellant as a fine spray or an aerosol.

Aside from demonstrating that the propellant could be used in electrospray thrusters, the researchers also expressed their interest in learning about the chemical byproducts of the process, since even though the two salts were already commercially available, the two have never been mixed in such way before. "Because no one has ever tried this type of propellant before, we expected to see species that no one else has ever seen before and in fact, we did," said Rovey, who also said that they have observed a swapping mechanism among the individual constituents of the two different salts.

They have observed the simultaneous bonding and detaching of the hydroxylammonium nitrate and emim ethylsulfate—a process that Rovey described as chaotic. As of now, they are still not sure as to how these chemical behaviors go about in the liquid mixture and how they show up in the sprayed substance.

Rovey then explained that these observations could potentially explain what is happening to the mixtures of salts as application for electrosprays. On the other hand, it also leads to a lot of questions on the transformation of the raw materials in these electrosprays and the products and byproducts they yield.