Locusts are commonly seen as pests ever since the time of the pharaohs in ancient Egypt 3,200 B.C. They are known as migratory transboundary insects that attack some of the world's weakest areas. They multiply to billions and vanish at some point.

But now it seems that these pests have a new use for humanity. Research shows that locusts can smell explosives and identify where it is located. Scientists see this as the first step in utilizing their ability to find bombs in an area.

However, it is not that easy to accomplish as some technical challenges need to be addressed before making a robot that would act as a bomb-sniffing bug. 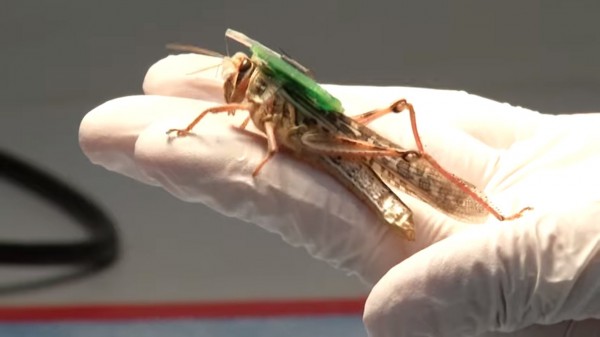 READ: Kosher Diet: Israeli Firm Wants to Use Locusts As Alternative Protein Source; Is It Safe to Eat?

Previous research from the Washington University in St. Louis showed that they could direct or control the locusts and demonstrated their ability to read insects' minds, which means that they can also detect what the locusts are smelling.

Now, research from the McKelvey School of Engineering suggests that locusts can smell explosives. The researchers were able to hijack the olfactory system of a locust to sense and distinguish the scents of different explosives in just a few hundred milliseconds of exposure.

The researchers published their pre-print paper online on August 6, in the journal Biosensors and Bioelectronics: X.

The researchers were also able to optimize a biorobotic sensing system that was previously developed by other scientists. They engineered it into detecting the locusts' firing neurons and sent information that can tell the researchers what the locusts are smelling.

Barani Raman, a professor of biomedical engineering and one of the researchers, said that they still do not know whether locusts can pinpoint the explosives. He noted that it was possible that these insects simply did not care about it since it was of no ecological significance to them as it was to humans.

Raman's previous work led him to discover that the olfactory system of a locust can be decoded into an 'or-of-ands' logical operation, allowing other researchers to know what the locust is smelling in different settings.

With the knowledge that locusts can smell explosives, the researchers were able to look for the same patterns when exposed to the locusts on a diverse set of explosives. These include the vapors from ammonium nitrate, PETN, DNT, and TNT.

They found that neurons responded differently on DNT and TNT and to the different chemical vapors of other explosives.

Now that they were able to establish that locusts' ability to smell and distinguish explosives, the next thing to do is to make them trace the explosives. This is when the "odor box and mobile" method enters.

Here, the locust sits in a tiny vehicle in the box then the researchers would inject explosive vapors inside the box. As the locust sniffed different concentrations of the explosive gases, the scientists studied the bugs' brain activity, which reflected the differences in vapor concentrations.

The team then attached electrodes in the locusts to record the insects' neural activity without hindering their movements. In that way, they will be able to optimize the system for transmitting the brain activity of locusts.

"Now we can implant the electrodes, seal the locust and transport them to mobile environments," Raman said. Perhaps a day would come when these locusts will be used in the search for explosives by Homeland Security.