California has been struggling with wildfires the past few days, and its effects are now visible from space.

NASA Astronaut Chris Cassidy shared images on Friday, August 21, showing large clouds of smoke covering The Golden State. The pictures Cassidy uploaded were taken from his position - the International Space Station (ISS) - hovering at an average of 248 miles or 400 kilometers above Earth.

"Thanks to all of the firefighters and emergency teams who are working around the clock trying to get these fires contained," the NASA astronaut and US Navy SEAL wrote in the tweet. "Thoughts and prayers to all of the people in the impacted areas. #CaliforniaFires." 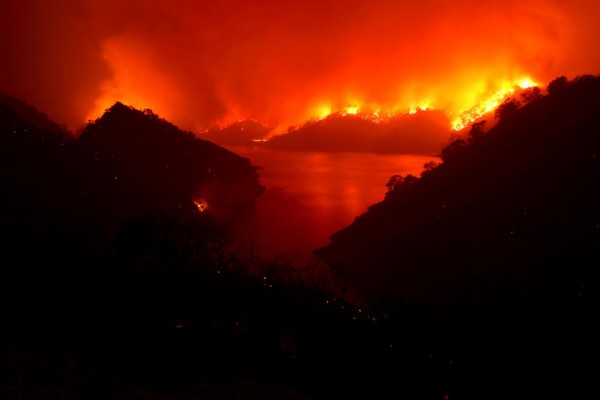 Thanks to all of the fire fighters and emergency teams who are working around the clock trying to get these fires contained. Thoughts and prayers to all of the people in the impacted areas. #CaliforniaFires pic.twitter.com/XKx6Yak5bP — Chris Cassidy (@Astro_SEAL) August 20, 2020

A Wave of Fires in The Golden State

The past week in California was marked with severe wildfires. According to an update from The Washington Post, the blaze has already devoured almost 771,000 acres of mostly unpopulated land. Even worse, the state's north and central regions alone contain close to 600,000 acres of the damaged California land.

Just north of San Francisco, a cluster of wildfires now known as the Lake Napa Unit (LNU) Lightning Complex Fires has engulfed the California counties of Napa, Sonoma, Solano, and Lake. This group of flames alone has already forced the state government to declare forced evacuations among its tens of thousands of citizens.

Meanwhile, the CZU August Lightning Complex Fires blazes near the state's southern coast, forcing residents of the San Mateo and Santa Cruz counties to leave their homes. The mass evacuation has forced Californians to find their temporary shelter, all while steering from the exposure risks brought by the coronavirus pandemic.

The severity of the wildfires has reached levels where some areas generated its own weather system. Hot air from these flames create updrafts or upward air currents. As it reaches greater heights, it starts to cool down and condense into water droplets in the air. These droplets soon form clouds, which in this case is called a pyrocumulus, or "fire cloud." Pyrocumulous clouds can also produce winds and lightning, having the potential to start new fires where the clouds drift.

Experts have pointed to the state's previously dry winter as having led to dry vegetation, which means large areas of flammable materials. Sparked by lightning and carried by winds, the California wildfires now include blazes considered among the top ten in the state's record of the biggest fires.

RELATED: What Makes Forest Fires Hard to Put Out?

Aside from the images taken by NASA Astronaut Chris Cassidy, a multitude of Earth orbit satellites have been monitoring the drifting wildfires, guiding both weather predictions and state government response to the problem.

Recently, a NOAA-NASA Suomi NPP satellite has been taking nighttime satellite images of the California wildfires. On August 20, at about 3:01 AM PST, the Suomi NPP satellite was almost exactly above The Golden State and captured images through its Visible Infrared Imaging Radiometer Suite (VIIRS) tool. Through its day/night band, it was clearly visible that some fires were carried further by the smoke, including its major wildfire clusters.

On the other hand, a NOAA satellite previously captured GeoColor imaging of the large smoke plumes from the California wildfires. Its NOAA-20 satellite, which carries five meteorological instruments including its own VIIRS tool, also captured the parts where fire and smoke covered California lands.

Check out for more news and information on Wilfires on Science Times.