Fungi May Be the Future of Sustainable Leather-Like Materials

Leather is traditionally made from animal skin, like from cattle, or synthetic polymers. Environmentalists and scientists have been working on finding ethical and environmentally friendly alternatives, such as fungi. 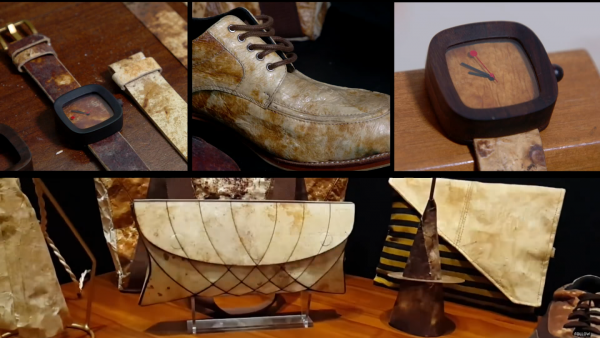 Researchers from the University of Vienna published their study in the journal Nature Sustainability. Fungi, a source of creating leather-like material, can replace synthetic leather made from plastics that come from fossil fuels.

Alexander Bismarck from the University of Vienna explained that fungi are generally 'CO2 neutral as well as biodegradable at the end of their life span.' The leather alternative is made from fungi that are upcycled from forestry and agricultural by-products like sawdust.

These low-cost by-products feed fungi to grow mycelium or the vegetative part of the bacteria that create thread-like hyphae or shiro. These long, tubular structures can then be harvested and treated to create sheets of biomass that mimic leather.

Several biotech companies have already been creating other materials derived from fungi such as slippers and book covers. For years, microbiologist Han Wösten and designer Maurizio Montalti from the Netherlands have been creating fungi-based products.

The pair developed a method of cultivating fungi in a controlled environment to replace materials made of plastic, wood, and rubber as well. Since their exhibition at the Micropia museum in 2017, Wösten and Montalti have wanted to educate society and correct 'negative ideas about fungus.'

Montalti said, 'I think as a society we detached ourselves from the acceptance [of fungus] because of the whole cleaning mania that developed in the 20th century, which brought good gains but also caused us to live aseptic lives and regard fungus as something dangerous.

They also discovered that making pure mycelium by allowing the fungus to degrade sawdust or straw resulted in material as strong as a synthetic plastic polymer (PVC). Another strain mimicked polyethylene, which is used to make plastic bags.

Placing mycelia into a mold retains humidity and can be fashioned into a specific shape. Wösten and Montalti have used oyster mushrooms for most of their products since it thrives on dead plant materials and is a non-toxic species.

Alexander Bismarck and his team have experimented with other species such as white button mushrooms to create paper. They've also been able to produce construction materials like foam, which can be used for insulation.

The study looks at the initial developments of commercializing sustainable leather substitutes made from fungi. One of the team's greatest challenge is consistently growing mycelium mats.

They must be 'exhibiting uniform growth and consistent thickness, color, and mechanical properties.' Bismarck and the rest of the researchers hope that more companies will produce more environmentally friendly leather alternatives made from fungi. They believe that the new material may be crucial in the future of 'ethically and environmentally responsible fabrics that are increasingly meeting consumer aesthetic and functional expectations and winning favor as an alternative to bovine and synthetic leathers.'

Check out more news and information on Sustainability on Science Times.