A Chinese virologist previously in hiding has stepped out and claims to have scientific evidence that the coronavirus disease (COVID-19) was actually made in a lab in Wuhan, China.

Dr. Li-Meng Yan, the scientist who said that she has researched the highly contagious disease last year, spoke out in an interview Friday, September 11, on the British talk show "Loose Women." Speaking from a "secret location," Dr. Yan made her comments about attempts to cover up the issue. 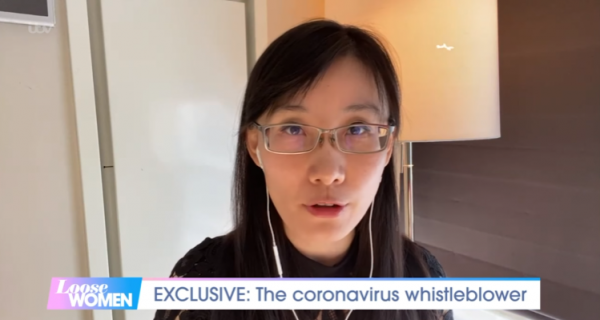 (Photo: Loose Women YouTube Channel)
Dr. Li-Meng Yan is a scientist who was working at the Hong Kong School of Public Health when she turned whistleblower on the Chinese Government after she alleged they knew about the spread of the coronavirus before publicly acknowledging the outbreak.

"This virus is not from nature"

Dr. Yan, then working for the University of Hong Kong School of Public Health, was asked to study a cluster of cases from an "unknown virus" back in December 2019. She explained since she got both her degrees from the mainland, she can speak Mandarin and was therefore tasked to be a part of the secret investigation about what was supposedly a new strain of pneumonia.

She said that after reporting her findings to her superior, who was also a consultant for the World Health Organization (WHO). Both her superiors and the WHO reportedly had no response and warned her "don't cross the right line" and "keep silent."

Finding the issue urgent, she contacted a famous Chinese YouTuber based in the United States. In the expose, which was in Chinese, explained that: (1) the Chinese government was just covering the COVID-19 virus, (2) there is already human to human transmission of the disease, (3) there is a "high mutant virus" that will become the outbreak soon, and (4) the Wuhan seafood market and the intermediate hosts for the virus are just a "smokescreen."

Dr. Yan added: "Final thing is, this virus is not from nature. This is based on the China Military Institute that discovered and owned some bad coronavirus named CC45 and ZXC41. Based on that after lab modification becomes a novel virus."

RELATED: Scientists Trace Lineage of the COVID Virus in Bats

The whistleblower also noted that her intelligence is from "the CDCs in China, from the local doctors, from doctors and other people around China."

When show host Christine Lampard asked: "Where does it come from then," Dr. Yan answered that it is from the lab in Wuhan controlled by the Chinese government.

Arguments in Support of Her Claims

Since January, up until she had to flee China in April, the female virologist claimed to have continued studying the virus. Working with a group of scientists, Dr. Li-Meng Yan plans to release her report on the coronavirus.

To conclusively prove that the virus indeed came from the Wuhan lab, her scientific report will include the genome sequence of the virus. She explained that the genome sequence for a virus is similar to fingerprints in humans. This will prove why the coronavirus came from the Wuhan lab, and "why they are the only ones who made it." She even assured the hosts of the show that "Anyone, even if you have no biology knowledge, you can read it, and you can check and identify and verify by yourself."

RELATED: COVID-19 Traced to Chinese Miners Back in 2012, According to a New Report

"This is the critical thing for us to know the origin of the virus," Dr. Yan said, adding that if people can't overcome it, it will be "life-threatening for everyone."

When asked whether she worried about her safety, the whistleblower said: "From the beginning, I decide to deliver this message out into the world, very scary at that time but I know that's the thing I have to do because I'm the doctor, I'm the scientist."

Watch the full interview with Dr. Li-Meng Yan below:

Check out more news and information on the Coronavirus Disease (COVID-19) on Science Times.