Chinese social media platform TikTok has reached an agreement with tech giant Oracle in the bid for its U.S. operations, beating Microsoft in a landmark deal that will set precedents between American and Chinese tech entities.

Both NBC News and the Wall Street Journal have confirmed the deal Sunday, September 13. However, specific details such as which parts of the platform would be endorsed over to Oracle. The agreement is the latest development in a protracted bidding process that saw Oracle go head to head with Microsoft, considered as the frontrunner as it announced interest to purchase TikTok's operations in the United States, as well as in Canada, New Zealand, and Australia.

RELATED: Microsoft Steps Into Legal Fight Between Epic and Apple

NEWS: A source directly familiar with the deal tells me that Oracle has been chosen to acquire TikTok US as the technology partner. — Jo Ling Kent (@jolingkent) September 13, 2020

Closing The Deal Ahead of Trump's Deadline

The high-profile sale follows weeks of pressure from the U.S. government to sell its business over allegations of data theft and subsequent threats to national security. President Trump and his administration have previously raised concerns on the tech company's ties to the Chinese government through its parent company, ByteDance. Trump has also expressed interest early in August that if possible, TikTok should sell its operations in its entirety.

RELATED: Tiktok Might Be Banned in the U.S., but Microsoft Says It Is Still Talking to Trump to Buy It

Furthermore, the issue escalated further as President Trump signed an Executive Order issued on August 6. In the executive order, the president cites security concerns to force TikTok to sell its U.S. business on or before September 15, 2020.

In response, ByteDance filed a lawsuit against the U.S. Government for allegedly denying them due process and argued that they pose no security threats as claimed by the Trump Administration. The platform has also denied that they will turn over their confidential user data, which they said are stored outside China.

Before August ended, TikTok CEO Kevin Mayer tendered his resignation from the post, a few months after he assumed the top position back in June. Mayer, an American citizen, cited that he decided to leave after the U.S. President ordered to sell its U.S. Assets to American companies within 90 days.

"In recent weeks, as the political environment has sharply changed, I have done significant reflection on what the corporate structural changes will require, and what it means for the global role I signed up for," Mayer said in his letter. Vanessa Pappas is temporarily filling the role of TikTok U.S. General Manager until a replacement for Mayer is appointed.

Microsoft was seen as the frontrunner in the deal before Oracle reached an agreement with TikTok. As early as August, Microsoft has been in talks about acquiring TikTok's U.S. assets. On August 2, the developer of the Windows operating system released a statement affirming its interests in reaching an agreement with the video-sharing platform. 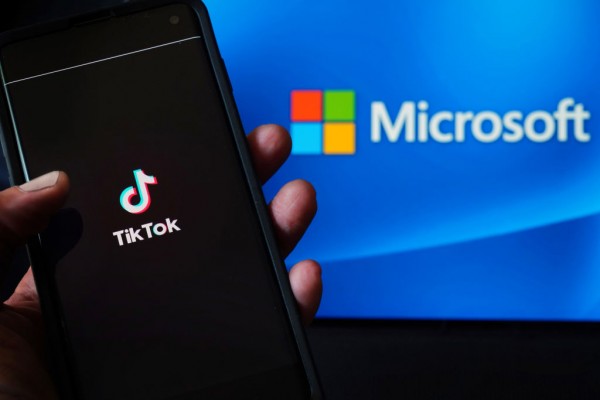 (Photo: Photo-Illustration by Cindy Ord/Getty Images)
NEW YORK, NEW YORK - AUGUST 03: In this photo illustration, a mobile phone featuring the TikTok app is displayed next to the Microsoft logo on August 03, 2020, in New York City. Under threat of a U.S. ban on the popular social media app, it has been reported that Microsoft is considering taking over from Chinese firm ByteDance.

However, on the following day, August 3, Trump said that he'd rather Microsoft purchase the entire app, expressing that the company's 30 percent share acquisition proposal is "complicated."

Shortly after reports of the ByteDance - Oracle agreement have been released, Microsoft released another statement confirming the news. Microsoft expressed confidence that their "proposal would have been good for TikTok's users while protecting national security interests."