The blazing forest fires that have devastated the US West Coast in the last few weeks have been found to reach as far as Europe.

European Union's climate monitoring service reported its findings on Wednesday, September 16. Surveillance data from the Copernicus Atmosphere Monitoring Service (CAMS) satellite shows how wildfires that have been raging in California, Oregon, and Washington are "tens to hundreds of times more intense" compared to average fires. 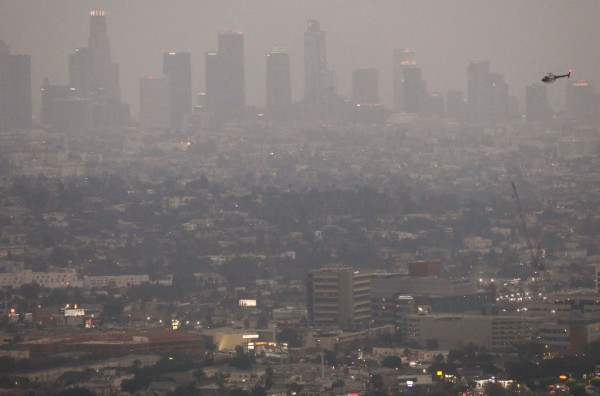 (Photo: Photo by Mario Tama/Getty Images)
LOS ANGELES, CALIFORNIA - SEPTEMBER 13: The downtown skyline is partially obscured by smoke from wildfires after sunset as a helicopter passes on September 13, 2020, in Los Angeles, California. Air quality was deemed ’unhealthy for sensitive groups’ in the metropolitan area today as California's national forests remain closed due to wildfires that have already incinerated a record 2.3 million acres this year.

Previously, these wildfire smokes were temporarily trapped over the western skies of North America due to strong pressure systems. Its stay over the area has adversely affected the air quality across major cities like Vancouver in Canada, and cities of Portland, Oregon, and San Francisco in the US.

However, as the weather changed on Monday, September 14, and started carrying smoke particles in the eastward jet streams.

The National Weather Services (NWS) in Baltimore-Washington announced in a tweet that satellite images show smoke crossing the Northeast and Mid-Atlantic regions. Adding that it obscures the sun and causes a drop in the average temperatures in the region.

Satellite images this morning show #smoke aloft moving over much of the Northeast and Mid-Atlantic. This smoke is obscuring the sun, and will keep temperatures a few degrees cooler today than what would be observed if the smoke was not present. https://t.co/6J6h6FM3Ps — NWS Baltimore-Washington (@NWS_BaltWash) September 15, 2020

Similarly, the NWS in Wakefield, Virginia also took to Twitter to inform the public of the "hazy, milky sky this morning," explaining that it was a result of the wildfire smokes from the West Coast "pulled to the east due to the jet stream aloft."

Notice that hazy, milky sky this morning? That is a result of smoke (well above our heads) from wildfires across the Western US. Notice that the smoke originates across the west and then gets pulled to the east due to the jet stream aloft. The haziness may increase later today. pic.twitter.com/wBOQHfpcmM — NWS Wakefield (@NWSWakefieldVA) September 15, 2020

The Los Angeles Times reported that the smokes have been spotted as far as Europe: being reported in the Netherlands as well as in some parts of Germany. Data from CAMS showed how the particles traveled as much as 8,000 kilometers, or almost 5,000 miles, to the northern part of the European continent.

"The scale and magnitude of these fires are at a level much higher than any of the 18 years that our monitoring data covers," noted Mark Parrington, wildlife expert and a senior scientist with CMAS.

A Climate and Health Hazard

NASA has also released its high-altitude satellite data that showed concentrations of carbon monoxide almost ten times higher than normal, Monday. Through the Atmospheric Infrared Sounder mounted on the Aqua satellite, NASA was able to measure carbon monoxide concentrations from 28 major wildfires, including the August Complex Fire that started almost a month ago, August 17.

NASA also noted that at the high altitude in the images they captured, the noxious gas has little effect on the air we breathe. However, the space agency noted that strong winds can still carry them downwards where it can pose great health risks to people and animals.

In the West Coast, where most of the fires have originated, a smoke advisory was already put in place for a section of Southern California. The South Coast Air Quality Management District announced the advisory from Monday to Tuesday. The Bobcat Fire,  blazing north of Azusa and Monrovia areas in the Angeles National Forest, as well as the El Dorado Fires in the San Bernardino Mountains, are among the chief wildfires compromising air quality in the region.