Some vaccines have been developed to effectively prevent the spread of infectious diseases such as polio and measles by training the immune system to fight the pathogens. Other illnesses like influenza (common flu), malaria, and HIV-1 also have working vaccines but are not as effective. Researchers analyzed the effectivity of using injectable hydrogels to sustain the delivery of vaccines into the immune system.

Scientists from Stanford University School of Medicine published their paper in the journal ACS Central Science. Developing injectable hydrogels may be one solution to control the timing of antigen and adjuvant presentation to the immune system.

Adjuvants are added to a vaccine to boost the immune system in producing more antibodies. This results in longer-lasting immunity and requires a smaller dose of antigens.

Antigens are certain molecules from the pathogens of a particular infectious disease. The immune system recognizes the antigen from an intruding virus or bacteria, which triggers a response to produce antibodies so that the body will resist the disease.

When a person becomes exposed to the same infectious disease, later on, the immune system would recognize the pathogen and quickly trigger an immune response. During natural infection, the body contains antigens for about two or three weeks but are only exposed to antigens for one or two days from a vaccine.

To mimic a natural infection, Eric Appel and the team developed an injectable hydrogel that allowed a sustained release of the vaccine into the immune system. They had hoped that a vaccine working longer than two days would also boost the body's immune response.

Vaccine components were mixed with a polymer-nanoparticle hydrogel, which encapsulated the antigen and adjuvant. When the combined material was injected into mice, it formed a region of inflammation in the lymph nodes that triggered specific immune cells called B cells and T cells, resulting in a slow release of the antigen and adjuvant for several days, unlike traditional vaccines.

Results from mice models showed that the hydrogels increased the vaccine's quality, potency, and lengthened the immune responses. Their immune response had a 1000-fold increase of antigen-specific antibodies compared to the traditional model of the same vaccine.

READ MORE: HIV Vaccine Could Be Available in 2021, Expert Says 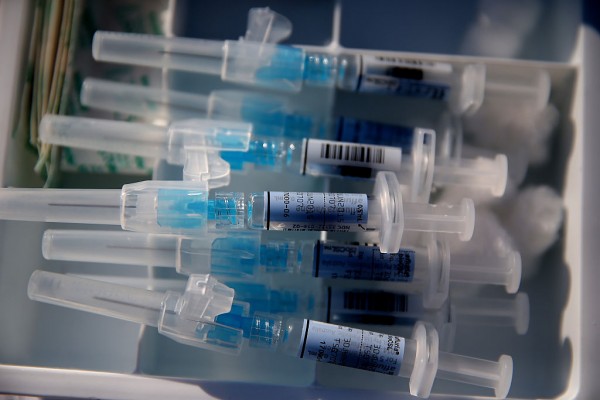 The next step would be to test if the injectable hydrogels can enhance existing vaccines of specific diseases. Overall, the study "introduces a simple and effective vaccine delivery platform that increases the potency and durability of subunit vaccines."

Similarly, another type of injectable hydrogel from an extracellular matrix was developed by Mayo Clinic researchers to enhance vascular healing from injuries in arteries and capillaries. Dr. Rahmi Oklu and the team created an innovative embolic agent that can "adapt to unique clinical scenarios presented by each patient and its ability to deliver effective treatment while minimizing any side effects." The gel forms a solid cast to avoid recurrent bleeding and the failure of blood flow.

Check out more news and information on Hydrogels on Science Times.