Exxon Mobil Corporation is planning to increase its annual carbon dioxide (CO2) emissions by as much as the annual output of Greece, according to leaked documents, with the company responding in an official statement.

Internal documents from the American oil and gas multinational were reviewed first by Bloomberg, showing plans opposite international efforts to mitigate the effects of global warming. According to projections in the leaked documents, its $210 billion investment plan is looking at a rise of 17 percent by 2025. 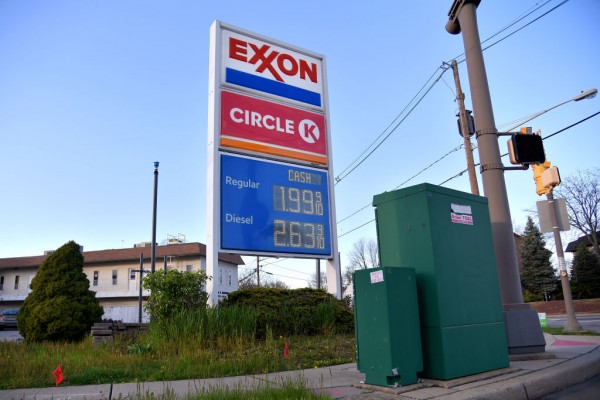 (Photo: Photo by Michael Loccisano/Getty Images)
CLARK, NEW JERSEY - APRIL 08: An Exxon gas station sign shows current gas prices, which have dropped dramatically due to decreased travel and demand, an increase in gas inventory, and stay-at-home orders issued by local governments because of the coronavirus on April 08, 2020, in Clark, New Jersey.

Going Against the Grain

This upward projection comes even as ExxonMobil's competitors, such as the British BP Plc and the Anglo-Dutch Royal Dutch Shell PLC have taken initiatives to reduce their respective carbon dioxide emissions.

Earlier this year, BP Plc laid down plans, under the direction of its new CEO Bernard Looney, to eliminate most of the carbon emissions from its operations and its products. In February, Looney declared: "The world's carbon budget is finite and running out fast." He stressed the need for a rapid transition to net-zero emissions, adding: "We have got to change -- and change profoundly."

Soon after, Royal Dutch Shell has also released its blueprint toward becoming a major player in the oil industry with net-zero emissions. On or before 2050, Shell aims to cut its emissions to zero, including those created from its power plants. Also by the same year, it has pledged to cut the emissions from its products by up to 65 percent.

Bloomberg notes, however, that these estimates were made before the global coronavirus pandemic, which has largely crippled the global oil economy - making it unclear whether ExxonMobil will follow its ramped up production and emission. Also, unlike its competitors, the American oil company, according to their report, has not yet made a commitment to cut its carbon emissions, either in its processes or in its products. Yet the company said that the figures in the leaked documents "reflect only some of the measures Exxon would take to reduce emissions."

Late Monday, October 5, ExxonMobil released an official statement from its headquarters in Irving, Texas. It claimed that the report earlier made by Bloomberg is "false and misleading," adding that the report ignored facts that they have provided in an on-the-record statement, as well as those given to the story authors.

ExxonMobil explained that the projection that was the focus of the Bloomberg report was "a preliminary, internal assessment of estimated cumulative emission growth through 2025," adding that it did not include "mitigation and abatement measures" that the company would have evaluated in its planning process.

"Furthermore, the projections identified in the leaked documents have significantly changed, a fact that was not fully explained or prominently featured in the article," the American oil producer argued.

The oil company also accused the publication of downplaying data that supposedly illustrated ExxonMobil's efforts in mitigating its emissions in the previous years. In response to the emission data mitigation efforts, the official company statement also included a link to their annual Energy and Carbon Summary - stressing that emissions from their operations have gone down by more than a fifth, or 20 percent, since 2009, translating to approximately 28 million tonnes.

Check out more news and information on Carbon Emissions in Science Times.