The Great Barrier Reef Has Declined By Half, New Study Shows

The latest survey at the Great Barrier Reef has shown that its populations - across small, medium, and large coral species - have generally declined over the last thirty years.

Dr. Andy Dietzel, the lead author of the study from the ARC Centre of Excellence for Coral Reef Studies (CoralCoE), noted that though there have been many studies on the structure and volume of human populations, or trees as its equivalent in the natural world, corals have not received the same amount of attention from the scientific community.

Dietzel explained in a press release that they measured changes in colony sizes, noting its importance in understanding the demography and breeding capacities of corals. Dietzel and his colleagues monitored coral communities along the Great Barrier Reef from 1995 to 2017, discovering a general decline in their numbers. 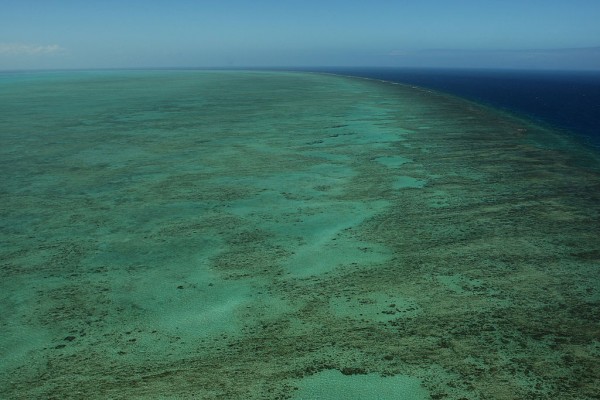 (Photo: Photo by Phil Walter/Getty Images)
CAIRNS, AUSTRALIA - AUGUST 07: Aerial views of The Great Barrier Reef are seen from above on August 7, 2009, in Cairns, Australia. A recent report by marine scientist Charlie Veron claims that the reef will be so degraded by warming seas that it will be gone within 20 years and that this situation is now irreversible. He goes on to predict that once carbon dioxide levels hit levels predicted between 2030 and 2060, that all reefs will become extinct and their ecosystems would collapse. The area pictured is also where conservation celebrity Steve Irwin was killed by a stingray.

A General Decline Across All Species

"We found the number of small, medium, and large corals on the Great Barrier Reef has declined by more than 50 percent since the 1990s," said Terry Hughes, co-author of the study and a researcher from CoralCoE. He explained that the decline was almost universal - both shallow and deep waters - and affected almost all species. He especially noted branching and tablet-shaped corals as being hit even worse, affected by the record-high temperatures recorded in 2016 and 2017 that triggered a mass bleaching event among corals.

RELATED: The Great Barrier Reef Has Bleached For the Third Time and is The Most Far-Reaching In 5 Years!

Branching and tablet-shaped corals are among those that become structures that protect small fishes. The decline of these species of corals leads to a decline in fish habitat, in turn affecting the fish population and affecting productivity in these areas. Dietzel notes that one of the major implications of understanding coral sizes is its effect on species survival and breeding.

"A vibrant coral population has millions of small, baby corals, as well as many large ones- the big mamas who produce most of the larvae," Dietzel explained. He notes that their results illustrate that the ability of the Great Barrier Reef to recover has been compromised compared to the past, explaining that "there are fewer babies and fewer large breeding adults."

Researchers have also stressed the need for more accurate data to better monitor demographic trends of corals. Dietzel noted that if mankind wants to understand how these populations change and if they can still recover, detailed demographic data is needed.

"We used to think the Great Barrier Reef is protected by its sheer size," Hughes said. "But our results show that even the world's largest and relatively well-protected reef system is increasingly compromised and in decline."

RELATED: Corals Emit Own Display of Colorful 'Sunscreen' to Fight Back Against Bleaching

Also, the Great Barrier Reef is considered as the world's largest unified structure made by living organisms, visible from outer space.

Among the efforts to protect The Great Barrier Reef is the Reef 2050 Plan, first launched by the Australian government back in March 2015. The 35-year plan proposes mitigation and conservation efforts for the massive coral reef.

Check out more news and information about The Great Barrier Reef in Science Times.