Researchers found that metal pollution from historic mining weakens the scallop shells and other bivalve mollusks like mussels and oysters off the Isle of Man's coast.

Bivalve mollusks have readily taken up tiny specs of metals inside them, which can harm their growth and survival chances and threaten the health of humans who consume their contaminated meat. Shellfish comprise one-fourth of the seafood, which means that the impact of metal pollution on them is largely important.

The research was led by an interdisciplinary team from the University of York who suggests that the metals like lead, copper, and zinc, which peaked in the late 19th century, are causing the shells of the scallops to become more brittle.

The researchers are concerned that the metal pollution in the area weakens the shells of scallops and leaves them vulnerable to their predators like the crabs and lobsters. In turn, this could affect the marine ecosystem because bivalve mollusks act as a water filter, which is an important function. 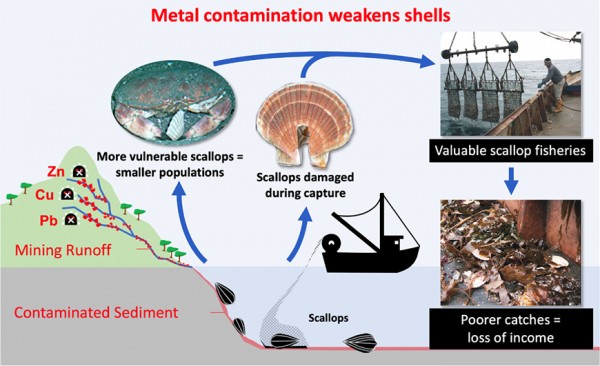 (Photo : University of York)
Metal contamination weakens shells. Photo from the paper entitled: "Metal pollution as a potential threat to shell strength and survival in marine bivalves" Published in the journal Science of the Total Environment

Moreover, the researchers also believe that metal pollution in other coastal areas around the world has caused mussels, oysters, and clams to have more brittle shells like the scallops.

The researchers said that the current consensus of the allowable levels of metal pollution should be changed due to the damage that scallops incurred even in areas where metal pollution is not thought to have caused any damage to the marine ecosystem, Phys.org reported.

Metals In The Marine Ecosystem

Metals are common in marine ecosystems, and the right level is good for supporting marine life. However, an elevated concentration caused by humans is poisonous to the sea and the life within it.

It is amazing that mining that is over from a century ago could still affect marine life today. But researchers believe that metals could have also done the same damage to other parts of the ocean as it is common in coastal areas as well.

This mining pollution could come from various sources and not just mining, like agriculture, industrial activities, offshore oil and gas exploration, and many others. Metals from these industries have caused high metal pollution levels in estuaries, ports, and coastal waters.

Even with stricter regulations in using metals in the marine environments, their threats continue to rise because they are highly persisted matter, and they are being demobilized by the ongoing coastal development and bottom-towed fishing gear.

The study tells people that even a small concentration of metals can still cause the weakening of the shells of scallops and therefore becoming vulnerable to the crushing claws of crabs and lobsters and might also have substantial ecological and economic effects.