Researchers at Stanford Burnham Prebys Medical Discovery Institute recently developed a drug that can lure stem cells to impaired tissue and enhance the efficacy of treatment.

This is considered a "scientific first," not to mention a major advance for the field of regenerative drugs. Such a discovery, which the Proceedings of the National Academy of Sciences or PNAS published could enhance the present stem cell treatments developed to cure such neurological disorders like stroke, spinal cord injury, ALS or other amyotrophic lateral sclerosis, as well as other neurodegenerative diseases -- and have their use expanded to new conditions such as arthritis or heart disease.

In the study, toxic or green cells disappeared when mice with a neurodegenerative condition were given both therapeutic or red cells and the drug SDV1a, which matched with delayed onset of symptoms and longer lives. 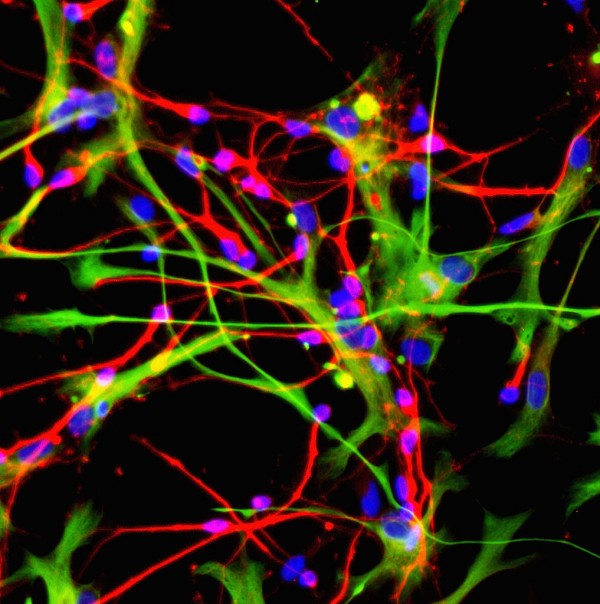 Results Suggesting Efficacy of the Drug

The study results proposed that SDV1a can be used to enhance the stem cell treatments' efficacy. According to Evan Snyder, MD, PhD, the Center for Stem Cells & Regenerative Medicine at Stanford Burnham Prebys professor and director, "the ability to instruct a stem cell where to go in the body, or to a particular region of a given organ is the 'Holy Grail' for regenerative medicine.

Snyder, who's also the senior author of the study, added, now, for the first time, stem cells can be directed to a desired area and focus its therapeutic effect.

Almost a decade-and-a-half back, the senior author, together with his team, found that stem cells are drawn to infection, a biological 'fire alarm' indicating that damage has taken place.

Nevertheless, using inflammation as a healing appeal is not possible since an inflammation environment can be dangerous to the body. Hence, researchers have been searching for mechanisms to help in the migration of stem cells or 'home' to the body's desired areas.

Such a mechanism or tool, according to reports on this new finding, would be a great contributor for disorders in which preliminary inflammatory indicators disappear over time, like chronic spinal cord injury or stroke, and conditions where the inflammation's role is not clearly understood, like heart disease, for one.

Fortunately, after decades of investing in stem cell science, scientists are now making "tremendous progress," said California Institute for Regenerative Medicine or CIRM president and CEO Maria Millan, MD said, in their understanding of the manner such cells work and the manner they can be attached to help reverse disease or an injury.

The CIRM partially funded this new study. Millan also said, Snyder's group has identified a medicine that could enhance "the ability of neural stem cells to home to sites of injury and initiate repair."

More so, the president and CEO also explained, the drug candidate could help fast-track the stem cell treatments' development, specifically for conditions including Alzheimer's disease and spinal cord injury.

In the research, study investigators modified an inflammatory molecule called CXCL12, which the Snyder's group discovered previously, could guide healing stem cells to areas that need repair to develop the SDV1a.

As such, this new medicine works by improving stem cell binding and minimizing inflammatory indicating and can be injected anywhere to attract stem cells to a particular site without causing any inflammation.

Since such inflammation can be dangerous, Snyder explained, they modified CXL12 by "tripping away the risky beat and maximizing the good bit."

Now, he added, they have a drug, drawing stem cells to an area of pathology, but not creating or worsening the unwanted infection.

"Now, we have a drug that draws stem cells to a region of pathology, but without creating or worsening unwanted inflammation."

Furthermore, to present that the new medication can improve the effectiveness of stem cell therapy, the scientists implanted SDV1a and human neural stem cells into the brains of mice that Sandhoff disease, a neurodegenerative disease.

The scientists have already started testing the ability of SDV1a to enhance stem cell therapy in a mouse model of Lou Gehrig's disease, also known as ALS, which results from progressive loss of motor neurons in the brain.

Snyder said they are optimistic that the mechanism of action of this new drug may potentially benefit various neurodegenerative disorders and non-neurological conditions like arthritis, heart disease, and even brain cancer.

Interestingly, he also explained, since CXL12 and its receptor is said to be implicated in cytokine storm that exemplifies severe COVID-19, some of their understandings of how to constrain infection without controlling other normal procedures selectively may be helpful in that field, as well.

Check out more news and information on Stem Cells in Science Times.