Human Evolution Could Be to Blame for Being Prone to Cancer, Study Says

Research performed by researchers at the University of California (UC), San Diego, School of Medicine and Moores Cancer Center helps understand why their report was published in FASEB BioAdvances.

Senior author Ajit Varki, MD, distinguished professor at the UC San Diego School of Medicine and Moores Cancer Center, said that the cancer cell SIGLEC12 gene creates a mutation that destroys the immune response the capacity to discriminate between 'self' and invading microbes. The body wanted, then to get rid of it.

The gene has not entirely vanished from the population, Varki explained. He said the Siglec-12 protein's defective shape seems rogue and has now become a disadvantage for the handful of individuals who still manufacture it. 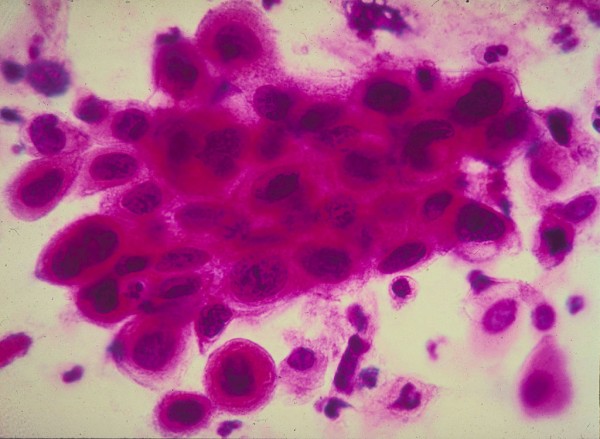 (Photo: American Cancer Society/Getty Images)
390487 02: (FILE PHOTO) Close up of cancer cells in the cervix. Cancer of the uterine cervix, the portion of the uterus attached to the female reproductive system's top.

People who have this type of cell are more prone to have cancer, experts say

In an analysis of regular and cancerous tissue samples, researchers observed that, relative to people who cannot produce Siglec-12, nearly 30 percent of people who generate Siglec-12 proteins are at more than double the risk of developing advanced cancer over their lives.

The body typically destroys genes that encode certain defective proteins over time, and around two-thirds of the global human population has stopped making the Siglec-12 protein. It was long considered to be of little practical significance because the gene only sticks about in humans. However, only little follow-up experiments have been performed over the two decades after it was found. Meanwhile, Siglec-12 also develops working chimpanzees.

When Nissi Varki set out to detect Siglec-12 in non-cancerous tissue samples using a protein antibody, about 30 percent of the samples were positive as predicted from the genetic details. In comparison, most advanced cancer tests were positive for the Siglec-12 protein from the same populations.

Looking at a separate group of patients with late-stage colorectal cancer, the researchers observed that the activated variant of the SIGLEC-12 gene was more than 80%. The result of these patients was lower than that of the minority of patients lacking it.

People belonging to the 'minorities' MIGHT get this cancer cell

According to scientists, cancer cells are often more likely to show up in people whose genetics have an intact SIGLEC12 gene, possibly since this coded Siglec-XII element attracts oncogenic pathways similar to Shp2. The findings have prognostic, diagnostic, and clinical effects.

By adding tumor cells modified to generate Siglec-12, the researchers have confirmed their results in mice. Compared to the regulation of tumor cells without Siglec-12, the resultant cancers developed even quicker and switched on several biological mechanisms believed to be active in advanced cancers.

These reports mean that the minority of people who can still manufacture the protein are at a higher risk of developing advanced cancer.

This knowledge is relevant since it could be leveraged for potential diagnostics and therapies, according to Ajit Varki. The team has conducted a urine test to diagnose the existence of the dysfunctional protein.

Experts could also use Siglec-12 antibodies to administer chemotherapy exclusively to tumor cells carrying the dysfunctional protein without affecting non-cancerous cells, he added.

Check This Out: Here's How Humans Are Still Evolving