E-Cigarette Flavors May Cause Measurable Damage to Lungs, Experts Say

Different studies have underlined the lung injuries incurred by COVID-19, and its manifestations are close to those caused by e-cigarettes and vaping.

The research released in SAGE Open Medical Case Notes describes three adolescents who recorded respiratory difficulties during the pandemic at the University of California-Davis (UC Davis) Health. They turned out to be COVID-negative ultimately, but both had a history of vaping.

Medical providers use EVALI to identify e-cigarette, or vaping, lung damage correlated with product use. 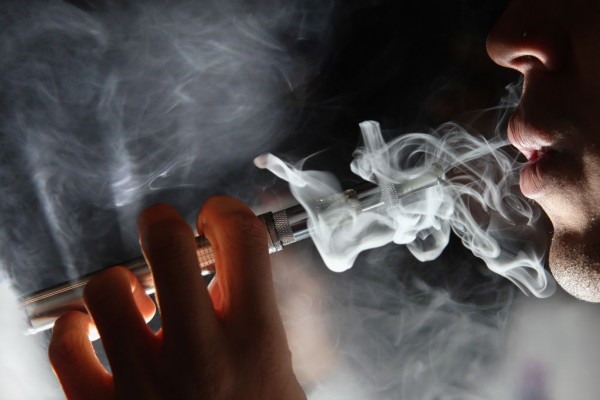 (Photo: Dan Kitwood/Getty Images)
LONDON, ENGLAND - AUGUST 27: In this photo illustration, a man smokes an E-Cigarette at the V-Revolution E-Cigarette shop in Covent Garden on August 27, 2014, in London, England.

The UC Davis study authors found out that EVALI and Covid-19 have several signs but have somewhat different recovery plans. They emphasized that EVALI could also be regarded and demanded the acceptable smoking/vaping records by healthcare professionals caring for adult patients with unexpected respiratory distress.

Popular signs of EVALI and Covid-19 include fever, cough, nausea, diarrhea, and stomach pain. With the pandemic, detection of EVALI is easy to overlook, the authors said.

Patients turned up with fever, nausea, and cough in the case series mentioned in the report. They had a high pulse rhythm, fast breathing, and poor blood oxygen levels. Their test findings indicated inflammation typically seen in COVID-19, but their checking for SARS-CoV-2 returned negative. When patients exchanged details regarding the previous vaporization, physicians could detect and manage EVALI with cortisone efficiently.

Ninety-nine percent of the liquids in e-cigarettes are flavored. Companies incorporate many chemicals to produce the 'perfect taste to build these flavor profiles.

Laura Crotty Alexander, MD, associate professor of medicine at UC San Diego School of Medicine in the Division of Pulmonary, Critical Care and Sleep Medicine and section manager of Pulmonary Critical Care at Veterans Affairs San Diego Healthcare System, said such blended compounds were found to be harmful to the lungs.

In vitro methodologies were then used by scientists at Adelaide University to observe how human airway cells responded to vapor directly added to them from 10 flavored substances used in e-cigarettes. They confirmed after exposure that cells were affected by all of the e-liquids, with certain flavors becoming more harmful than others.

Combined, the scientists said the results show that any time they vape, individuals who use flavored e-cigarettes harm their lungs. Material profiles for certain flavors of chocolate and bananas are among the most dangerous.

Lead author Miranda Ween, Ph.D., a senior postdoctoral researcher at the University of Adelaide and Royal Adelaide Hospital in Australia's Lung Testing Laboratory said that chocolate-flavored liquid vape had an unpredictably strong effect in particular. According to Ween, almost all cells were destroyed by the said taste, and the capacity of macrophages to almost fully clear away bacteria was blocked.

Ween says that it is important to identify both e-cigarette flavors further. She said that the study is sadly missing for anything so common worldwide that restricts e-liquids to a specific flavoring chemical that has been checked and determined by protection concentrations.

Read Also: Possibility of Link Between Vaping and COVID-19? Doctors Discuss It

Check out more news and information on Vaping on Science Times.