Autoimmune conditions are like an invisible epidemic. Depending on which genetic disorders are included, figures differ. Around 23.5 million and 50 million Americans live and struggle with autoimmune diseases, per American Autoimmune Related Diseases Association. 75 percent of all individuals are women, the National Institute of Health estimates, which has formally declared it a significant women's health problem.

There are plenty of hypotheses as to whether women are more vulnerable to these disorders, but there are no conclusive responses from experts. Keep reading to learn whether more females could be impacted by autoimmune disorders, which are most prevalent in females, and the effect they have. 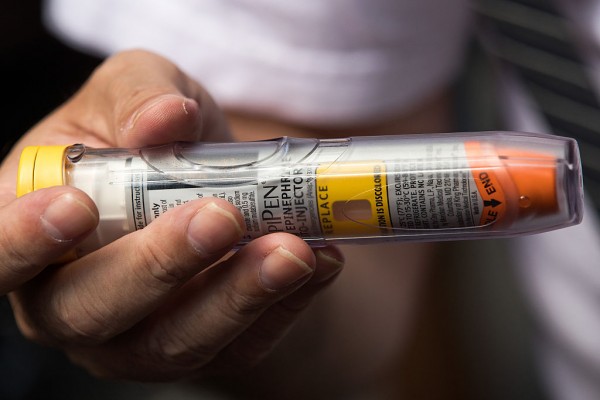 (Photo : Drew Angerer/Getty Images)
NEW YORK, NY - AUGUST 30: Timothy Lunceford Stevens, who suffers from autoimmune diseases and allergies, holds an EpiPen as he speaks to reporters during a protest against the price of EpiPens, outside the office of hedge fund manager John Paulson, August 30, 2016 in New York City. Paulson's hedge fund is a major investor in Mylan, the pharmaceutical company who has raised the price of EpiPens over 400 percent in the past 8 years.

What are autoimmune diseases?

The body is covered by a strong immune system against pathogens, microbes, and other foreign substances. It will attack itself as the immune system mistaken good tissues for diseased ones. This mechanism is the core symptom of autoimmune disorders, called autoimmunity.

Autoimmune diseases are widespread and have an effect on more than 23.5 million Americans, according to the Office on Women's Health. Such diseases are a leading cause of death and injury.

Autoimmune diseases may invade any part of the body, undermining some functions of the body and possibly creating problems that endanger life. Rheumatoid arthritis (RA), systemic lupus erythematosus (lupus), multiple sclerosis (MS and Graves' disease are other well-known autoimmune disorders.

To keep symptoms monitored and to minimize the risk for life-threatening issues, autoimmune disorders are incurable and need lifetime care.

Every autoimmune disorder is special, although certain similar symptoms are shared among most. Symptoms that are popular include:

There appear to be ambiguous early signs of autoimmune disorders, which may make it tough to get a prompt diagnosis. A clinical evaluation, psychiatric records, blood samples, imaging, and other screening tests are typically used to detect an autoimmune disease.

Although these diseases may not be reversed, innovations are enhancing prognosis and patient function in medicines for managing autoimmune disorders. In preventing autoimmune flare-ups, dietary improvements, such as tension control, a balanced diet and exercise, may also be beneficial.

Why are women impacted most often?

There are many hypotheses on why women more frequently than men get autoimmune disorders. Researchers speculate that gender differences in antibodies, estrogens, genetic vulnerability, environmental factors, and stress may play a role in the development and increased risk of these conditions for women.

Compared with males, females typically have more active and more sensitive immune systems. Also, they usually have unconventional inflammatory responses as their immune systems are activated.

Under normal conditions, inflammation must react as soon as possible to attack the pathogen and the inflammatory phase would stop. In autoimmune disorders, though, inflammatory reactions can become persistent and potentially contribute to serious harm to tissues, organs and joints.

Hormonal variations had to do with another potential explanation as to whether women have a greater chance of autoimmune disorders. Indeed in women, sex hormones may potentially intensify the reaction of the immune system to infection, ultimately contributing to the production of an autoimmune disorder.

From adolescence and birth to menopause, women and girls undergo critical hormone activities during their lives. All these activities will raise immune system responses to amounts that can cause an autoimmune condition along with other risk factors.

Additionally, conception will require major shifts in the hormone levels of estriol, progesterone, and prolactin. Pregnancy may either enhance or flare up (worsen) these symptoms in people who have autoimmune disorders.

Other research suggests that a fetus depends on the immune response of the mother, possibly allowing itself to be blocked by the maternal immune system to defend the fetus. Another likely cause for the emergence of an autoimmune disorder is a suppressed immune system, as are hormonal shifts in the postpartum era.

There is also proof that several years after birth, fetal cells may survive and circulate in a woman's body. These cells may be involved in the production or progression of certain autoimmune disorders.

Researchers devote a great deal of attention to the function that environmental influences play in developing autoimmune diseases. Many assume that sensitivity to multiple forms of external contaminants may cause autoimmune reactions, including environmental pollution and some medicines.

For certain exposures, studies have found a female gender difference such as the correlation between cosmetics and the elevated risk of lupus or RA in women.10 While the evidence is restricted, researchers need to look more frequently at items used by women, such as hair dyes and lipstick, to decide what particular environmental variables pose the highest risk.

Stress can impact the immune system of your body. In fact, when stress alters the capacity of cortisol to control inflammation, autoimmunity may evolve. In the Journal of the Medical Association, a research published in 2019 indicated that stress from painful and stressful life experiences may raise the likelihood of an individual experiencing an autoimmune disorder.

When they experience traumatic circumstances, women perceive stressors different from men and their environments react differently. In the Journal of Neuroscience Studies, a study published in 2017 found that while men and women documented comparable amounts of stress in difficult conditions, men had more vigorous responses, while women showed smaller weaker responses.

A decreased cortisol response will not defend against inflammation if a person is suffering chronic stress. And irregular and persistent inflammatory responses, especially in people who have weaker responses to stress, can eventually contribute to autoimmune disorders.

ALSO READ: COVID-19 May Cause Devastation Only to Some Due to Autoimmune Diseases, Experts Say

Check out more news and information on Autoimmune Diseases on Science Times.