In the middle of the rollout of vaccines and fears of a new and possibly more contagious coronavirus variant, Britain has discreetly updated its vaccination playbook to allow for what it calls the "mix-and-match vaccine regimen."

If a second dose of the COVID-19 vaccine a patient initially got is not available, or if the maker of the first shot is not known, the health officials said, another vaccine may be replaced.

This new regulation contradicts the guidelines of the United States, where the Centers for Disease Control and Prevention has noted that the COVID-19 vaccines authorized are "not interchangeable," and that both the safety and efficacy of a series of mixed products have not been assessed. More so, both doses of the said series need to be completed using the same product.

Some scientists claim Britain is gambling with this new guidance. According to vaccine expert John Moore at Cornell University, "There are no data on this idea whatsoever."

The New York Times reported, Moore also said, officials in Britain appear to have "abandoned science fully now, and are only trying to guess their way out of a mess." 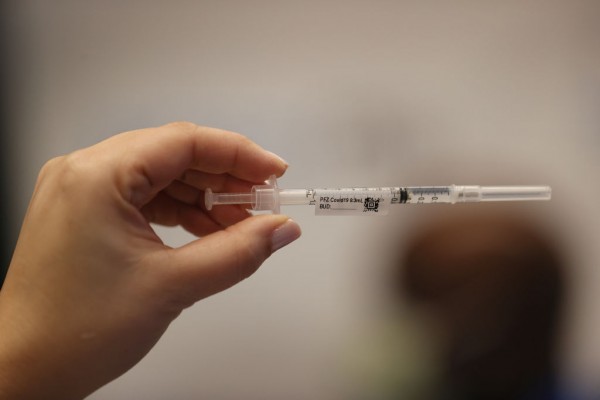 (Photo : Joe Raedle/Getty Images)
Britain has discreetly updated its vaccination playbook to allow for what it calls the ‘mix-and-match vaccine regimen.’

To date, the country has provided an emergency authorization for two vaccines, which companies Pfizer and AstraZeneca developed.

Based on the new guidance of Britain, every effort needs to be made in order to complete the dosing regimen with a similar shot initially administered.

However, when the same vaccine is unavailable, or if the first product administered is not known, it is reasonable to provide one dose of the product that's locally available for the second time.

This option, as per the recommendation, is preferred if the patient is "likely to be at immediate high risk" or is regarded as "unlikely to attend again."

Since both vaccines aim the coronavirus's spike protein, it is possibly the second dose will help enhance the response to the initial dose.

Following requests for remark, Public Health England officials drew attention to the similarities of vaccines between AstraZeneca and Pfizer. Specifically, they said that clinical tests trying mixed regimes were to begin sometime this year.

Some researchers claim that it is far from sure that the said vaccines can be interchanged. An infectious disease physician at the University of California, San Francisco, Dr. Phyllis Tien, said, "None of this is being data-driven" at the moment.

Meanwhile, Pfizer spokesman Steven Danehy cited the company's late-stage clinical test results, which depended on a two-dose timetable of its vaccine with 95-percent efficacy when it comes to the prevention of COVID-19.

Dr. Danehy added, while decisions on substitute dosing regimens belong to health authorities, Pfizer believes it is essential that health authorities make surveillance initiatives on any substitute schedules applied and to guarantee each recipient is "afforded the maximum probable protection," which means being immunized with two doses of the vaccine.

Both vaccines of Pfizer and AstraZeneca introduce a protein also known as spike into the body that, while not contagious itself, can teach immune cells to identify and combat the actual coronavirus.