A total of over 22 million people have been mandated to stay inside their homes, twice the number affected in January 2020 when the central government of China placed Wuhan under lockdown, a move then seen as unusual. Wuhan is the central city where COVID-19 was first reported.

According to a New York Times report, testing the Chinese government's success in reducing the infection, the country is indeed currently experiencing its worst flare-up of the illness since last summer.

When a few COVID-19 cases materialized this month in a province that surrounds Beijing, seemingly spread at a wedding party in a village, the said news site reported, authorities in China "bolted into action."

Two cities, Shijiazhuang and Xingtai, with over 17 million people, were locked down. More so, almost every resident in the said areas was ordered tested, and the initiative was completed in just a few days.

Transportations had been shut down too, and weddings, funerals, and most importantly, a conference of the provincial Communist party were canceled. 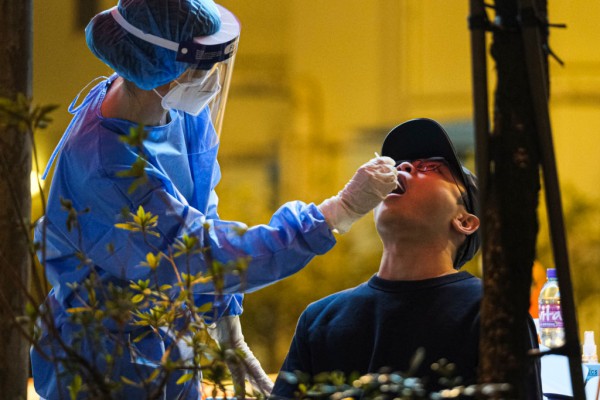 (Photo : Keith Tsuji/Getty Images)
Residents of a densely packed apartment block were evacuated and would undergo mandatory COVID-19 testing, after authorities said they found design flaws in draining pipes that led to several new infections on multiple floors in the building.

This week, lockdowns expanded, which included Langfang, another Beijing city, and a Heilongjiang county, a northeastern province. Even the districts in Beijing, the capital of China, shut down, too.

The urgency of the current response of the government stands opposing that of the Wuhan officials in 2019 who feared criticism if they revealed the mysterious new infections then emerging.

A similar report that The Economic Times released said, local officials there had pushed through with a Communist party conference similar to the canceled one now, in Hebei, despite the awareness of the danger of disease that spreads among people.

Since Wuhan, officials have developed a playbook, mobilizing party squads to instantly respond to new flare-ups by sealing off neighborhoods, conducting extensive testing, and ordering quarantine of big groups when needed.

According to Li Keqiang, the Chinese premier, in the process of prevention and control of infectious disease, "one of the key points is to seek truth from facts," to be open and transparent in releasing information on epidemic and "never to allow covering up or underreporting."

China, a nation of 1.4 billion people, has reported 109 new cases each day, on average, over the past week.

The said figure would open numbers in countries facing far worse. These include the United States, averaging over 250,000 new cases each day, although they said to be worst in China since last summer.

No new deaths have been reported by China's National Health Commission, but the World Health Organization, which utilizes information from China, has reportedly recorded 12 deaths this year so far.

The National Health Commission has not responded to the request for an explanation to the inconsistency in figures.

Meanwhile, in Hebei, the province where the new flare-up has been concentrated, government authorities declared last week a "wartime state," showing no indication of lifting soon.

Plan to Vaccinate Millions of People

As part of its initiative to control the spread of COVID-19 in the country, the Chinese government has moved ahead with its plans to vaccinate around 50 million people before the celebration of the Lunar New Year in February, a holiday spent in which hundreds of millions of people are traditionally crisscrossing China to visit their families and loved ones. By the middle of this week, over 10 million doses of the COVID-19 vaccine had been distributed.

Despite the vaccinations, authorities have already cautioned people not to travel ahead of the holiday. China's Center for Disease Control deputy director, Feng Zijian said, such measures if implemented, can guarantee that "no large-scale epidemic rebound takes place."

While these new restrictions have resulted in inconvenience in millions of people, there seems to be no considerable public resistance to them.