While the Milky Way alone has more than 8,000 stellar streams - all named Theia - one particular stream, Theia 456, appears to be special.

Stellar streams are a group of stars that orbit a nearby galaxy. These are usually former globular clusters or even dwarf galaxy that were stretched thin and torn apart by tidal forces. After going through multiple datasets gathered by the European Space Agency's (ESA) Gaia Space Telescope, a team of astrophysicists discovered that Theia 456's stars - 468 of them - were formed at around the same time and are traveling in the same direction in the galaxy. 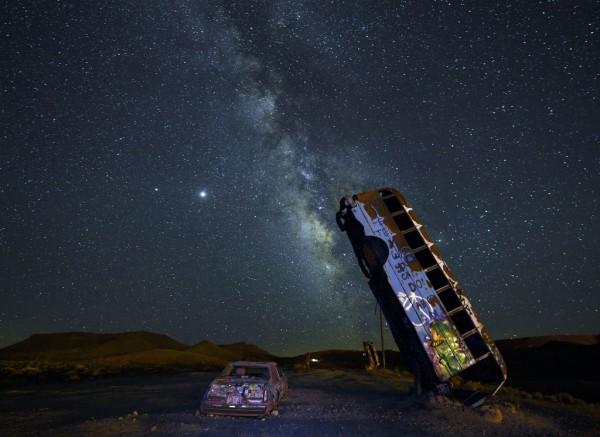 (Photo: Photo by Ethan Miller/Getty Images)
GOLDFIELD, NEVADA - JULY 18: The Milky Way galaxy as seen from the International Car Forest of the Last Church on July 19, 2020, in Goldfield, Nevada. The Car Forest is an outdoor art installation of junk vehicles planted in the ground vertically.

"Most stellar clusters are formed together," said Jeff Andrews, one of the astrophysicists in the study from Northwestern University, in a statement from the university. He adds that the exciting part about the Theia 456 discovery is that the stream is "long and stretched out" despite being formed simultaneously.

"There are relatively few streams that are nearby, young and so widely dispersed," Andrews added. The new study was presented at the virtual press briefing at the 237th meeting of the American Astronomical Society. Titled "Theia 456: A New Stellar Association in the Galactic Disk," the study was presented as a part of "The Modern Milky Way" session, January 15.

It has been understood that stars usually form in groups; most observed star clusters are spherical in shape. In the past few years, researchers found new patterns for these galactic structures, with stellar streams believed to be former tight clusters stretched by tidal forces.

"As we've started to become more advanced in our instrumentation, our technology, and our ability to mine data, we've found that stars exist in more structures than clumps," Andrews adds. He explains that these create the streams formed across the sky. Also, while stellar streams have been known for decades, astrophysicists are starting to find hidden ones.

With an estimated length of more than 500 light-years, Their 456 is considered a hidden stellar stream, sitting deep inside the Milky Way's galactic plane. Its position, together with a lot of other streams, makes it easy to miss in a larger group of some 400 billion stars. Aside from the Theia streams, others are found in other parts of the universe, mainly through telescopes focused elsewhere aside from the Milky Way.

"We tend to focus our telescopes in other directions because it's easier to find things," Andrews noted. Now that the streams are found inside the galaxy itself, he likens the experience to "finding a ripple in an ocean."

To identify the new streams, researchers employed AI-driven algorithms to run through the incredibly large datasets. Additionally, they also developed additional algorithms to cross-reference their data with pre-existing catalogs of documented iron abundances of stars.

Finding that the 468 stars have similar iron abundances, researchers found that these stars most likely formed together about 100 million years ago. Additionally, they also examined the light curves dataset, which describes the stars' brightness changes over time.

Check out more news and information on Theia on Science Times.