Winter Hexagon: Six Constellations Combine in the Sky This Week; How to See It?

The Moon will lead you to this week's enjoyable star pattern. It is recognized as the Winter Hexagon, and stars from six separate constellations are included.

The pattern is referred to as an asterism in terms of astrology. That implies it's a pattern connecting the stars to a form. The Winter Hexagon connects stars from six separate constellations. 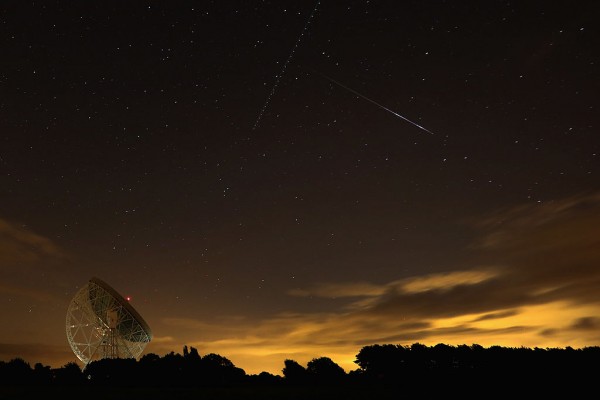 (Photo : Christopher Furlong/Getty Images)
HOLMES CHAPEL, UNITED KINGDOM - AUGUST 13: A Perseid meteor streaks across the sky over the Lovell Radio Telescope at Jodrell Bank on August 13, 2013 in Holmes Chapel, United Kingdom.The annual display, known as the Perseid shower because the meteors appear to radiate from the constellation Perseus in the northeastern sky, is a result of Earth's orbit passing through debris from the comet Swift-Tuttle.

How to See the Winter Hexagon

On Monday and Tuesday of this week, you will use the Moon to reference the Winter Hexagon star pattern.

You're going to need a clear sky, but you're not going to need any special tools. Binoculars or a small telescope, however, could give you a far better view.

The brightest star is Sirius, and he would be the one farthest below the Earth.

First, you may want to spot this and then follow the outline anti-clockwise to the upper right towards the Rigel star and then to Aldebaran again upwards.

ALSO READ: Space Missions in 2021: Here are The Most Exciting Events To See

The six stars of first magnitude are Sirius' identifiable blue, seated at the bottom of the formation; Rigel, at the foot of Orion; brilliant Aldebaran; Capella, high in the atmosphere; Pollux, one of the heads of Gemini; and Procyon, per Sky & Telescope, in Canis Minor.

Often this category is mentioned with the star Castor, the other head inside the constellation of Gemini. Castor is not a star of first magnitude, but it's still pretty bright. In the center of the hexagon, you will even see the brilliant red star Betelgeuse at the shoulder of Orion.

According to Joe Rao at Space.com, if you search south, you can find the constellation quite early in the evening, about 9:30 pm local time. For quite a time, they'll be rising.

In the middle of the pattern, you may also see the bright star Betelgeuse. The Guardian said the same view is available in Australia, albeit upside down and in the northern sky.

This is not a secured party, however, because they are spaced out in the clouds. For any of the nights from January 23-27, EarthSky has a good graph of where the Moon would shine compared to these six stars.

If you are not sure where they are positioned, you should still download a night sky scanning software that lets your smartphone pinpoint constellations and stars if you're not exactly what you're looking at.

Few applications are free, but many are paid apps, so it depends on whether or not you choose to put up with advertisements. Reading an app's feedback and looking at how many users have scored it before installing is advisable.

Afterward, make sure you've got your eyes a break from your screen, but stargazing is better until your eyes have adjusted to the dark.