Since x-rays were first discovered by Wilhelm Conrad Roentgen, they have been used widely in medical applications. Technological advancements have led to other imaging methods aside from radiology, such as fluoroscopy, computer tomography (CT) scans, and cancer radiotherapy. CT scans, for example, takes several x-ray scans from different angles, collating these images to generate cross-sectional views of the patient.

At the base of these imaging technologies are low-exposure environments, which in turn requires high-resolution and cost-effective x-ray detectors that operate at a condition called "low photon flux," with photon flux referring to the volume of photons that make contact with the detector at a point in time, and determines how many electrons are generated as a result. 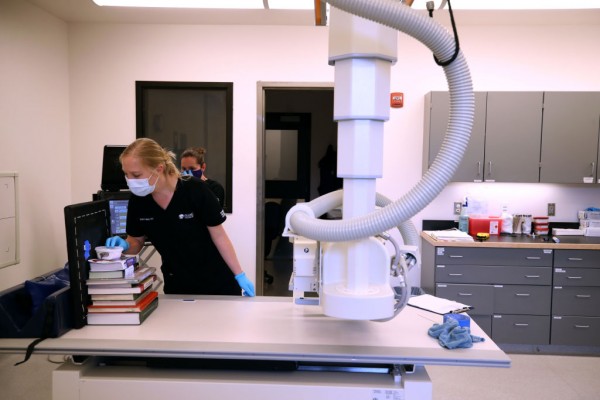 A team of scientists, led by László Forró from the School of Basic Sciences at the Ecole Polytechnique Federale de Lausanne (EPFL) in Switzerland, has developed a new photodetector reported in the latest ACS Nano, February 17. With 3D aerosol jet-printing technology, they were able to design a new technique for creating highly efficient x-ray photodetectors that can be easily added to standard microelectronic circuits, creating more powerful medical imaging devices that can deliver better scan qualities.

The new photodetectors use perovskites - basically minerals that contain organic compounds bound to a metal in a crystalline structure.- together with graphene, ultrathin carbon allotropes generally existing in sheets. Researchers report that the new x-ray photodetectors are versatile, easy to synthesize, and could potentially have applications in energy harvest and storage (solar cells), lighting (LED lamps), lasers, and in medical imaging.

On the other hand, aerosol jet-printing is an emerging fabrication technology that allows controlled and precise deposition of materials at the micron-scale, allowing for the embedding of materials on almost any surface. It has been used to create electronic components - resistors, inductors, capacitors, sensors, antenna - by 3D printing them.

Researchers used the aerosol jet printing device at the Centre Suisse d'Electronique et Microtechnique (CSEM) in Neuchatel, also in Switzerland, 3D printing perovskite layers on graphene substrates. The concept behind this is that the perovskite will serve as the photon detector and the electron discharger as well, with the graphene substrate amplifying the generated electrical signal.

For the particular perovskite, researchers used methylammonium lead iodide (MAPBI3), which has seen increased interest among materials science researchers because of its optoelectronic properties, as well as its relatively low cost.

"This perovskite has heavy atoms, which provide a high scattering cross-section for photons, and makes this material a perfect candidate for X-ray detection," explains Endre Horváth, the chemist of the research team.

"By using photovoltaic perovskites with graphene, the response to X-rays has increased tremendously," Forró notes on the resulting material. He also explains that if these materials are used for X-ray images, the required dosage for generating an image would be down by "more than a thousand times," which further decreases the health risks of this procedure on humans.

Check out more news and information on X-Rays in Science Times.