Russia, China Eyes Placing Humans on Lunar Space Station; Are They Really Up for Space Race?

Two world superpowers are collaborating on a lunar space station. Unfortunately, the United States is out of the list. 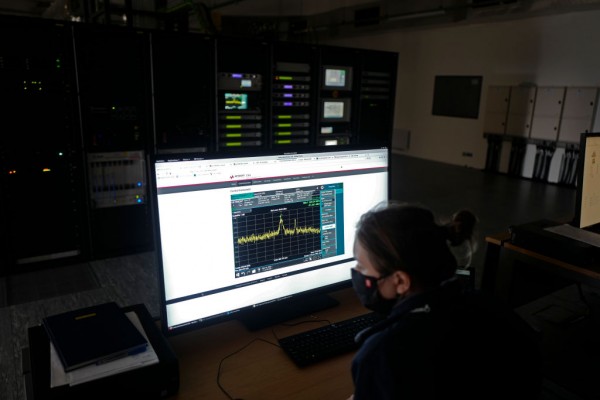 (Photo : Hugh Hastings/Getty Images)
THE LIZARD, ENGLAND - FEBRUARY 18 : Goonhilly team member Olivia Smedley watches live signals arrive from NASA's Perseverance rover as it lands on the surface of Mars on February 18, 2020 on The Lizard, England. Two antennas, GHY-3 and GHY-6, at Goonhilly Earth Station have been modified over two years to be compatible with NASA and ESAs' Deep Space Networks. GHY-6 will be receiving data from NASA's JPL Perseverance rover during its landing on Mars's surface this evening (GMT). This will be the first time communications direct from the surface of Mars will be received in the UK and successful transmission of data will verify GHY-6 becoming the world's first commercial deep space antenna.

The heads of Russia's and China's space agencies - Roscosmos and CNSA, respectively - signed an agreement on March 9 to partner on the International Scientific Lunar Station (ISLS). Humans could one day live and work at this moon-based space station.

Space Station on the Moon

In a statement released by the CNSA, China and Russia intend to lead the production, building, and operation of the lunar space station. Still, they are open to collaborating with other countries on the mission.

Several testing facilities will be available at the ISLS. Experts designed these to allow various experiments, from fundamental research to lunar exploration and use.

The lunar space station would be planned to function independently at first. However, Roscosmos believes it has the power to sustain a human presence on the moon in the future.

Space News said China revealed its tentative plans for the ISLS in August, announcing that development will begin this decade and last into the next. Short-duration crewed missions could start in the early 2030s, with longer-duration tasks beginning as early as 2036.

It's unclear if that's still the intention now that Russia has agreed to participate in the program.

Russia is no stranger to space partnerships; it partnered on the International Space Station with four other space agencies, including NASA.

China, on the other hand, is a beginner to space travel. It took until 2003 to launch a human into orbit, decades after other organizations had accomplished the feat.

The lunar space station will be able to maintain a human presence on the moon in the future.

It's been making up for lost time lately, too, sending a spaceship to Mars and returning rocks from the moon's surface in the last year. In 2019, China became the first nation to arrive on the moon's far side.

Today, it's working on a lunar space station with one of the world's most seasoned space agencies, which could lead to some of tomorrow's most important technological breakthroughs.

"This will be the largest international space cooperation project for China, so it's significant," Chen Lan, an independent analyst who specializes in China's space program, told the Guardian.

China Wants Astronauts to Stay on Moon; For How Long?

Dr. Wu Weiren, who is the chief designer of China's lunar exploration programme, said that Chinese astronauts would stay on the moon for a longer time if China builds a lunar space station.

"This will be a long-term stay on the moon, not a short-term stop," Dr. Wu said in a Reuters report.

Before human-crewed landings, China has planned several uncrewed missions, including establishing a robotic base to explore the Moon's south polar area.

While Chinese rockets may not have enough thrust to take astronauts to the Moon at this time, Dr. Wu said China expects to make breakthroughs in rocket design between 2021 and 2025.