The first working, long-duration crew under NASA's Commercial Crew Program successfully returned from the International Space Station early Sunday morning onboard SpaceX's Crew Dragon spacecraft. They splashed down in the Gulf of Mexico six months after arriving at the orbital laboratory in November last year.

NASA astronauts Victor Glover, Mike Hopkins, and Shannon Walker and Soichi Noguchi of the Japan Aerospace Exploration Agency (JAXA) boarded Crew Dragon. They undocked from the space station at 8:35 p.m. ET on Saturday to launch their six-hour journey back to Earth. 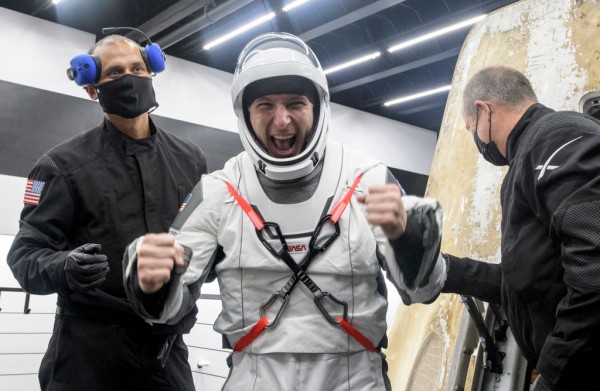 (Photo: Bill Ingalls/NASA via Getty Images)
PANAMA CITY, FL. - MAY 02: In this NASA handout, NASA astronaut Mike Hopkins is helped out of the SpaceX Crew Dragon Resilience spacecraft onboard the SpaceX GO Navigator recovery ship after he, NASA astronauts Mike Hopkins, Shannon Walker, and Victor Glover, landed in the Gulf of Mexico off the coast of Panama City, Florida, Sunday, May 2, 2021. NASA's SpaceX Crew-1 mission was the first crew rotation flight of the SpaceX Crew Dragon spacecraft and Falcon 9 rocket with astronauts to the International Space Station as part of the agency's Commercial Crew Program.

The crew splashed down at 2:56 a.m. ET on Sunday off the coast of Panama City, Florida. It marked the first overnight splashdown of a crewed US spacecraft since Apollo 8 splashed down in the Pacific Ocean in December 1968, NASA said.

SpaceX mission control welcomed Dragon on behalf of NASA and the SpaceX teams and thanked them for flying with Elon Musk's space transportation services company.

"For those of you enrolled in our frequent flyer program, you've earned 68 million miles on this voyage," the mission control personnel added.

A live feed of infrared cameras captured Crew Dragon's nighttime dive in the Gulf of Mexico. A pair of first-responding "fast vessels" sped for the space capsule minutes after it splashed down, ensuring the Crew Dragon's parachutes deploy as intended before they reached the water, preventing the capsule from being yanked upside down in the water. A SpaceX rescue ship arrived soon after to use a crane to hoist Crew Dragon onto a deck.

"It really could not have been a more flawless journey home for Crew Dragon Resilience," NASA public affairs officer Leah Cheshier said on a live feed.

The four astronauts were helped out of the spacecraft by medics before returning to the ground and boarding a NASA plane to the agency's astronaut headquarters in Houston, Texas.

ALSO READ: SpaceX Astronaut Couple Shares Details About Life On and Off ISS

The Crew-1 astronauts spent approximately 167 days onboard the space station since launching from Florida last November. The space station is a research facility orbiting Earth 250 miles above ground that has continuously hosted foreign crews of astronauts for over two decades. Due to strong winds in the splashdown region, their return was originally scheduled for Wednesday, April 28th.

Resilience Now The Longest-Serving US Spacecraft on ISS

After SpaceX's first crewed flight, Demo-2, in May 2020, this Crew Dragon spaceship, nicknamed Resilience by its crew, was the second SpaceX capsule to carry humans. Resilience broke the record for the longest-serving US spacecraft docked on the ISS, outlasting the 1974 Skylab 4 crew by 84 days.

The Demo-2 flight, which returned NASA astronauts Bob Behnken and Doug Hurley from space after a two-month test mission, saw the first splashdown of a SpaceX Crew Dragon capsule in August 2020.

The Verge said a swarm of Florida boaters came dangerously close to Crew Dragon after a mid-day splashdown in the Gulf of Mexico. Since the capsule's flammable fuel could spill and endanger everyone outside the spacecraft, NASA and the US Coast Guard beefed up security for Crew-1's splashdown to ensure no curious boaters got near this time.

According to NASA's Commercial Crew Program's Steve Stich, no boaters were present because the splashdown occurred too early on Sunday morning.

After the Resilience crew splashed back, NASA's human exploration head Kathy Lueders said in a 5 a.m. ET press conference, "Reentry is rough, and the spacecraft was in a wonderful state." "But you just worry when you go through the comms blackout - and it was so nice to hear Mike's voice," she said, referring to the radio silence that Crew Dragon experiences when it plunges into Earth's atmosphere.

At the press conference, NASA's chief flight director Holly Ridings said, "All four crew members are doing very well." "You don't get to wake up on the space station and go to sleep in Houston too much... The atmosphere and orbital mechanics don't always cooperate, but today they did."