Diversity in culture, often characterized by linguistic variety, and biodiversity are found to be connected to one another in new study - and this could offer insights in preserving the natural environment and indigenous populations.

In a study titled "Linguistic diversity and conservation opportunities at UNESCO World Heritage Sites in Africa" in the latest Conservation Biology journal, researchers believe that this could help indigenous populations in Africa and presumably the rest of the world.

"The punchline is, that if you are interested in conserving biological diversity, excluding the Indigenous people who likely helped create that diversity in the first place may be a really bad idea," explains Larry Gorenflo, Penn State professor landscape architecture, geography, and African studies, in a press release from the university. He additionally explains that humans are also part of the ecosystem, expressing hope that their study would help usher a "more committed effort" to involve and consider Indigenous peoples in conserving local ecosystems with critical biodiversity. 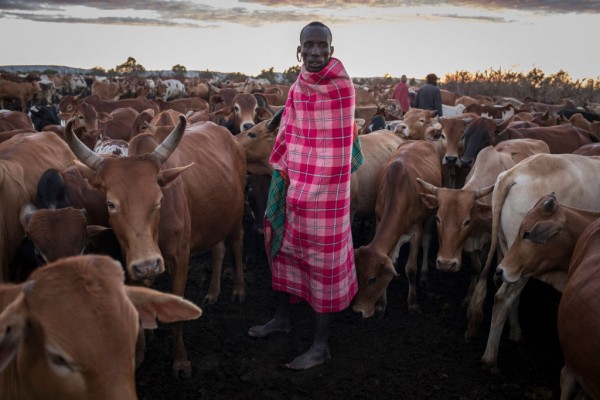 (Photo: Photo by Siegfried Modola/Getty Images)
MARA LODGES, KENYA - DECEMBER 22: A Maasai man keeps watch over his cattle on December 22, 2020, in the Mara North Conservancy, Kenya. Conservation efforts here have long derived funding from international visitors who go on safari and stay in high-priced lodges in the reserve.

ALSO READ: Indigenous People Are Teaching Researchers About the Environment

Researchers studied data on geographic information systems concerning local languages, finding that 147 of them overlaps with the UNESCO designated sites. They found that these indigenous languages occurred in all Natural World Heritage sites examined, except for one. Gorenflo explains that the exception, the Namib Sand Sea desert in Namibia in southern Africa, is a dry, desolate location with no one living there as far as he knows.

For the rest of the examined Natural World Heritage sites, not only are there indigenous populations, but most of the time, they also help in the management of the environment they live in.

Growing Evidence for Involving Indigenous Population in Managing the Environment

"The big message is basically that there is increasing evidence that cultural diversity and biodiversity are interrelated, and we found this at a fairly fine geographic scale," Gorenflo adds in the Penn State article. He notes that this makes "a strong argument" for the inclusion of the Indigenous population for ecosystem management efforts. Furthermore, he explains that in cases where there is more than one linguistic group in a certain site, it's better to let them deal with the areas where they live.

Gorenflo explains that while Ethnologue is not perfectly correct, it presents major patterns. Meanwhile, researchers used the IUCN Red List of Endangered Species, which also included range of data for monitoring biodiversity for most species. For avians, they referred to the Birdlife International and "Handbook of the Birds of the World."

Check out more news and information on Wildlife Conservation in Science Times.