For the first time, after disappearing for roughly 3,000 years, a Tasmanian devil has been born in the wild in mainland Australia. After conservationists released 26 adult marsupials in the sanctuary at Barrington Tops, CBS reports.

The release marked the first steps in an attempt to re-establish a sustainable population of the endangered marsupial that has been decimated by illnesses in its habitat on the island of Tasmania.

Conservationists hoped that the decade-long effort would equal the success in the United States in the 1990s with the return of wolves in Yellowstone National Park. 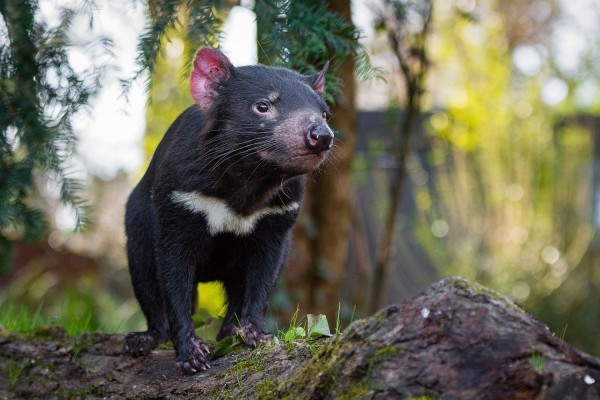 Sarcophilus harrisii, commonly known as the Tasmanian devil, is a carnivorous mammal that can live up to 5 years in the wild and grow up to 20-31 inches and weigh 9 to 26 pounds. The endangered marsupial has had a drastically decreasing population trend over the last few decades.

The famously feisty mammal has a coat of course, black or brown fur, and a stocky profile that makes them misidentified by many as baby bears. Most have patches or stripes of white on their chest and light spots on their rear or sides.

Tasmanian devils have shorter rear legs that give a lumbering piglike gait and are known as the largest carnivorous marsupial in the world. Once abundant in Australia, Tasmanian devils are now only found on the island state of Tasmania. According to National Geographic, biologists suspect that the extinction on the mainland of the marsupials roughly 400 years ago has a direct relationship with the introduction of dingoes or Asian dogs.

Tim Faulkner, president of the conservation group Aussie Ark, said that there was huge pressure on the time and a lot riding on the release, if the marsupials weren't able to breed, their efforts would be in vain.

Researchers have been intensely studying the world's largest carnivorous marsupial from afar since the release last year. This week, researchers celebrated the birth of 7 Tasmanian devil joeys in the roughly 1,000-acre Wildlife Sanctuary.

On Facebook, Aussie Ark said that park rangers inspected the female's pouches and found small joeys in perfect health. The conservationists are planning additional health checkups in the next few weeks to ensure the Tasmanian devils' breeding success.

The remaining Tasmanian Devil population in the island state has been devastated by contagious fatal diseases known as Devil Facial Tumor Disease that struck back in the mid-1990s. To date, the disease has killed roughly 90% of the Tasmanian devil population and will now have fewer than 25,000 local devils left, reports CBS News.

Faulkner explains that a population of Tasmanian devils far from the diseased landscape is crucial, and conservationists are thrilled by the progress thus far. Don Church, president of the Re:wild group, says that the success doesn't only have positive effects on Tasmanian devils but bodes well for other endangered species, which can be saved if reintroduced in the wild of Australia.