The planet is headed towards a "watershed" global warming increase of 1.5° C in the next five years, a new United Nations report warns.

There is now a 40 percent chance of hitting the "watershed" mark and the odds increase in time, said the World Meteorological Organization (WMO), the UN weather agency. 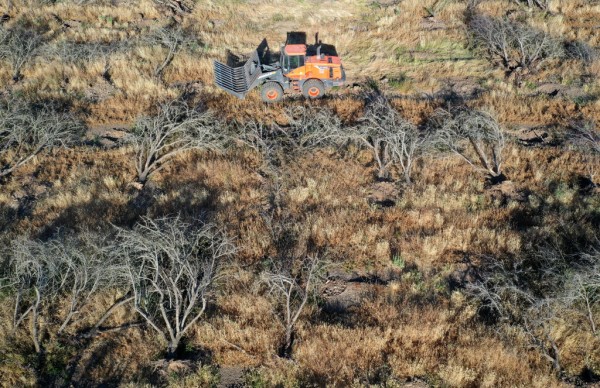 (Photo: Photo by Justin Sullivan/Getty Images)
SNELLING, CALIFORNIA - MAY 27: In an aerial view, a worker with Fowler Brothers Farming uses a wheel loader to move almond trees during an orchard removal project on May 27, 2021, in Snelling, California.

A Target for All Paris Agreement Signatories

The 1.5°C warming threshold was established by all signatories of the Paris Agreement: an international agreement on how to tackle global warming and climate change.

The value provided was set as a limit for temperature increase, with the hope of preventing permanent environmental changes that could "threaten the wellbeing of all life on earth." The international agreement, signed by 189 member countries, calls for a limit to global warming of only 2°C or lower.

A report released by the United Kingdom's Met Office, the "Global Annual to Decadal Climate Update," and cited by the WMO, details that there is now a 90 percent chance of at least one year during the 2021-2025 period becoming the warmest on record. The projection is set to top the warmest temperatures recorded back in 2016.

The year 2020 is already tied with 2016 for being the warmest year on record, according to an analysis from NASA.

In a continuing trend of global warming, the average temperature for the world last year was 1.02°C warmer compared to the baseline taken from the 1951-1980 temperature average.

The WMO reported that until the end of 2025, high-latitude regions and the Sahel -- the region in Africa between the Sahara to the north and the Sudan savanna in the south -- will experience wetter years. There might also be increased chances of more tropical cyclones in the Atlantic compared to the average baseline from the 1980s.

Taalas said that the latest study is another "wake-up call" against global warming that the world needs to exert more effort and fast-track its commitments toward the reduction of greenhouse gas emissions and to attain carbon neutrality. Current technology now makes it possible to trace greenhouse gas emissions back to where they came from in order to precisely target reduction efforts, he added.

Taalas revealed that out of 193 WMO member states, only half of them are equipped with the latest warning devices, stressing the need to develop and obtain these capabilities. The ability to adapt and monitor climate change is especially critical to a number of sectors like health, water supply, agriculture, and renewable energy, he said.

Check out more news and information on the Paris Agreement in Science Times.