Neurology experts have presented a new imaging technique that could be the solution to detecting the early stages of neurological disorders. The imaging technology, also known as super-resolution, was introduced at the annual meeting of the Society of Nuclear Medicine and Molecular Imaging. 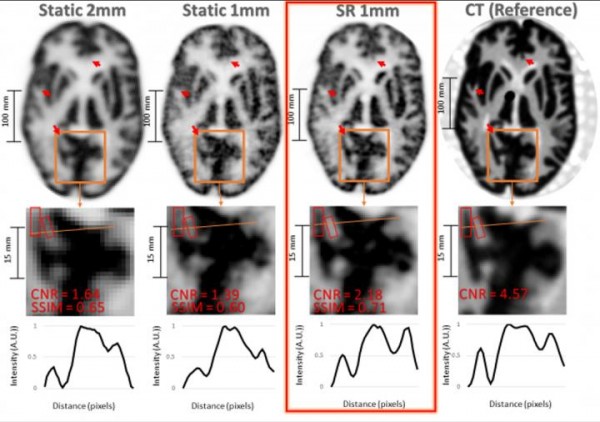 The new brain imaging can determine the first few stages of neurological diseases, which are still undetectable until today. With the high-resolution technique that combines the traditional positron emission tomography PET and external motion tracking system, early stages of brain disorders such as Alzheimer's disease can now be constructed into a highly detailed photo of the brain.

The study published in the journal JNM entitled "Super-resolution in brain PET Using a Real-Time Motion Capture System" shows how neurologists developed super-resolution brain scanning. The research proves how this new method is significantly better compared to conventional PET imaging that produces images in limited resolutions due to the patient's extra movements while conducting the scan.

Non-human primate subjects helped to achieve the results of the study. The PET scanner, together with the external motion tracking device, was evidently effective in constructing images of the subject's brain on high precision, even though excessive movements were exhibited by the primates. The produced images matched the expectations, all with super-resolution and intricate details, reports EurekAlert.

According to Gordon Center for Medical Imaging's expert Yanis Chemli, the new scanning technique encompasses the traditional method. It negates the poor effect of the head motion and also increases sampling information through the super-resolution regardless of the movement of the targets.

The super-resolution technique is not yet available in the market. But although it has only been tested in the preclinical stage, neurologists are planning to extend the studies through the help of human volunteers. Chemli suggests that the success of super-resolution scanning can be a key to analyze brain disorders, especially the mystery surrounding the infamous Alzheimer's disease.

Alzheimer's disease gives clues of its existence in the human brain through the presence of tau proteins. These proteins can be found in tangles that start to form a cluster in the early stages of Alzheimer's disease. This trace can show very early on tiny parts of the brain, even decades before the symptoms of the disease manifest.

Chemli implies that the super-resolution can put the studies ahead of the disease. Once it identifies these tiny traces, early diagnosis can prevent and even treat Alzheimer's disease in the future.

With the development of super-resolution technology, physicians will be able to tell proper expectations regarding neurological disorders the patients may experience. In addition, the new imaging system will ease the worries of potential brain patients, as they will be diagnosed and treated more quickly.

The combination of PET and the motion tracking device will undoubtedly be beneficial to both experts and patients, considering that Alzheimer's disease and other neurological disorders are not easy to combat. The solution from the Society of Nuclear Medicine and Molecular Imaging will put the chances of our medical procedures on the brain faster than the spread of the sixth leading cause of death in the United States.