Born in Europe, Melanie Barboni, a post-doctoral fellow at UCLA, has always been fascinated by the wonders of the hummingbirds. The problem is that hummingbirds aren't endemic to Europe.

When Melanie moved to Los Angeles to her office at the UCLA campus, she quickly set up a bird feeder on her office window. Little did she know that her humble dreams of observing hummingbirds would lead to her becoming known as the "Hummingbird Whisperer." 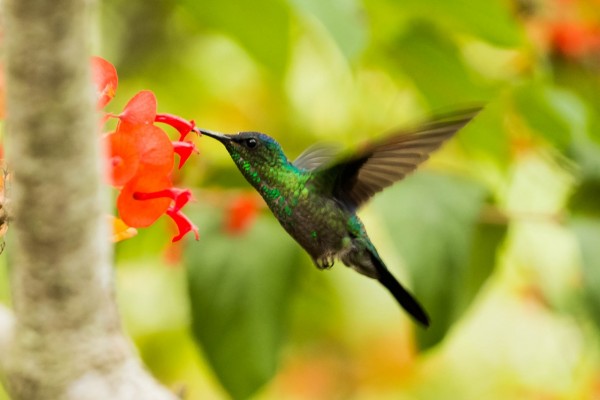 According to the Smithsonian National Zoo & Conservation Biology Institute, Hummingbirds are part of the avian family known as Trochilidae, weighing only 2 to 210 grams with narrow bills and saber-like wings.

Male hummingbirds and occasional females often have colorful, stiff, and highly reflective colored feathers on their throat and upper chest. There are roughly 350 known species of hummingbirds, reports Discover Wildlife, the smallest that can weigh only 1.95 grams, is known as the bee hummingbird of Cuba. The Trochilidae family is known to produce the smallest eggs rough the size of a pea or a woven spider web.

The unique hummingbirds are well known for the swift strokes and power their wings possess. The power and small size allow the bird immense agility during flight. In fact, hummingbirds are the only known vertebrates capable of sustaining hovering and can even fly backward and right-side-up.

Hummingbirds have been recorded to clock nearly at 30 mph indirect flight with more than 45mph during courtship dives. While the migratory ruby-throated hummingbird normally flies for 18-20 hours straight across the Gulf of Mexico, powered only by fat stored from food and some help from the wind.

UCLA assistant researcher Melanie Barboni specializes in topics around volcanic activity and eruptions. However, outside of her field, she has come to be known as the Hummingbird Whisperer.

Every weekday, Melanie welcomes a colony of more than 200 hummingbirds to her office window with specialized nectar that she mixes from large bags of sugar and water. In a flash of color, birds flit around her 4 80-ounce bird feeders that dangle outside her office window on the ground level of the UCLA campus. When Melanie reaches for the brim of the feeders, hummingbirds will fondly perch on the hand of the human who feeds them.

According to UCLA Newsroom, if the Hummingbird Whisperer fails to feed the swift birds on time, hummingbirds will whizz inside her office and demand their meal.

Unfortunately, the real nemesis of these fantastical birds is climate change. Melanie explains that hummingbirds are at high risk of losing their natural habitats because of extreme climatic changes. She works with the UCLA Institute of Environment and Sustainability to find better sustainable ways to protect the birds.

RELATED ARTICLE: Giant River Otter Resurfaces in Argentina After Being Extinct for Over 40 Years