Not the Glutton That You Think: Black Holes Do Not Swallow Everything in Space

Experts claim that black holes do not truly devour light, matter, or energy. They bend and twist the very fabric of spacetime because they have so much weight packed into such a small space.

Scientists from Stanford used NASA's NuSTAR telescope and the European Space Agency's XMM-Newton, two telescopes developed particularly for X-ray observation and research of black holes, to examine at a galaxy 800 million light-years away called I Zwicky 1.

The results of the investigation of the supermassive black hole were published in Nature under the title "Light Bending and X-ray Echoes From Behind a Supermassive Black Hole." 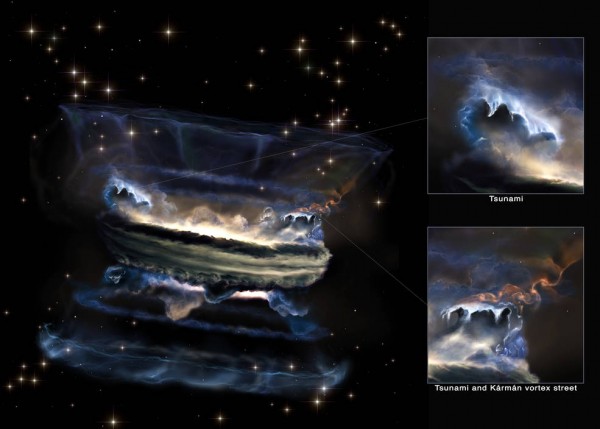 (Photo: Illustration by Nima Abkenar)
This artist's rendering shows a supermassive black hole enshrouded in dust, and strange features in nearby gas. High-energy X-rays from the disk surrounding the black hole interact with this gas and give rise to two unusual features: Tsunamis (light blue "waves" above disk) and a Kármán vortex street (orange). Computer simulations show that these phenomena would be very large, on the scale of light-years.

Science Alert said that one of the world's finest physicists proposed a brilliant theory for why black holes do not consume light, matter, or energy. Leonard Susskind, one of the string theory founders, said in a series of documents that black holes expand by increasing complexity internally. This is a property we do not notice while looking at them from afar. In other words, they grow inward rather than outward.

Moreover, this theory might have a counterpart in expanding our own Universe, which likewise appears to be expanding. Susskind may be guessing on the formation of the Universe, but his views on why black holes grow inward more than outward are worth delving into. Of course, this study is theoretical by definition, and it is difficult to verify or refute through peer review.

However, there are a few interesting ideas that are worth exploring. To accomplish so, researchers would need to go back to the beginning. Simply said, black holes are massive masses that distort space to the point where even light lacks the necessary velocity to escape.

It has been confirmed that black holes have their own gravitational force capable of swallowing light. The photons absorbed by the black holes, on the other hand, may leave imprints or echoes. When the echoes bend around the black hole, they appear to wrap around the space-time area, making themselves apparent to astronomers.

Dan Wilkins, a researcher at Stanford University's Kavli Institute for Particle Astrophysics and Cosmology and the study's principal author, explained that a black hole does not allow any light out after it has been consumed, and there should be no remnants of light visible.

According to a CBS News article, lights may be seen near the black hole because the cosmic area actually warps space, which could potentially bend light.

Roger Blandford, a Standford University specialist and co-author of the study, expressed delight in the findings. According to Blandford, astrophysics scientists had no clue how magnetic fields behave near a black hole decades ago. Fortunately, Einstein's perplexing theory of general relativity is already visible in our time thanks to advances in astronomy.

Researchers did not focus on the theory of general relativity in their study and they had no ambition to prove it at that time. They only coincidentally discovered the evidence while looking into their major topic of interest, the origins of the corona discovered at the rear of the supermassive black hole I Zwicky.

When it comes to how a black hole may be studied,  scientists at Stanford University might have done just the tip of the iceberg. The researchers now intend to construct a three-dimensional picture of the black hole's surroundings and continue to employ specialized space observatories to advance their study.