Penn State scientists made a luminous sensor that can detect a rare-earth element called terbium. By attaching protein to the element, the researchers were able to build this apparatus.

The protein will then be gathered to make the metal, which is frequently used in energy lights, cellphones, and even electric vehicle batteries.

Researchers issued their study, "Probing Lanmodulin's Lanthanide Recognition via Sensitized Luminescence Yields a Platform for Quantification of Terbium in Acid Mine Drainage," in ACS Publications.

Terbium is mostly used in many technologies that we use daily. Everything What said this rare-earth element is found in modern electronics such as low-energy light bulbs, mobile phones, and solid-state drives (SSD). 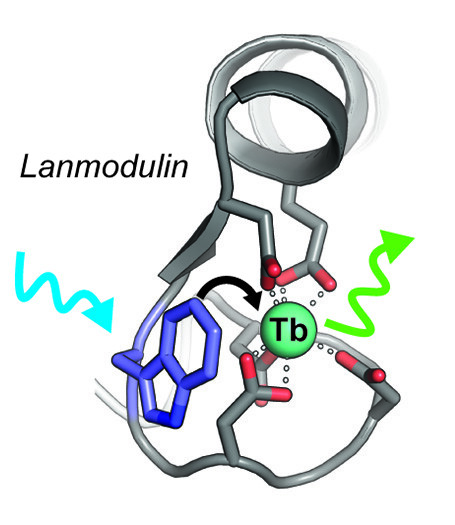 (Photo : EMILY FEATHERSTON, PENN STATE)
The protein lanmodulin has been developed into a sensor that can identify the rare earth element terbium from complex environments, such as acid mine drainage. The sensor, illustrated here, emits green light when bound to terbium.

Terbium, Orion Metals said, is the component in cellphones that gives the LCDs their green color. While it's interesting to learn that it has so many applications, scientists may find it difficult to get this rare-earth element.

For example, ICP-MS, the gold standard technology for detecting terbium, may be too expensive for those who wish to utilize it. This mass spectrometry approach might potentially cause difficulties in the environment, such as acid interference with the element.

Joseph Cotruvo Jr., the senior author of the terbium study, said in a Penn State News report that the occurrence of terbium on the globe is prevalent in unexpected locations like e-waste and acid mine drainage.

Cotruvo, a Louis Martarano Career Development Chemistry Professor, added that they created a luminescence-based sensor that can detect and even quantify tiny amounts of terbium in complicated acidic materials, according to

Lanmodulin's Role on the Terbium Sensor

Phys.org said the lanmodulin binding protein, which is well-suited for rare-earth elements, is required for the luminous sensor to function. The protein's binding property is appropriate for the sensor.

To make lanmodulin usable for the sensor, the researchers required to modify it using the amino acid tryptophan.

Tryptophan acts as a terbium sensitizer, according to Cotruvo.

Terbium is the main component for the green hue on smartphone displays, to give you an example of its application.

When lanmodulin and tryptophan bond, a light is emitted that represents the terbium concentration.

The challenge in obtaining rare earth elements such as terbium, according to Cotruvo, is removing them from the rock. Finding the element was like looking for a needle in a haystack, according to the study's author.

Following their discovery of terbium-bearing locations, Penn State scientists tested the sensor in Pennsylvania, specifically at an acid mine drainage treatment plant.

The researchers discovered that the sensor may be comparable to traditional methods for identifying rare-earth elements. The device may also detect even the tiniest amounts of terbium in a given environment.

Penn State also developed a protein-based sensor in 2019 that might speed up the hunt for rare-earth elements, another Penn State News report said. The Lanthanide sensor has been designed to detect calcium.