With the invention of new rechargeable batteries, electronic vehicles can now travel farther without the need for a recharge to complete a trip successfully.

According to a Stanford University report, an international team of scientists led by the university has developed the said rechargeable batteries that can store a maximum of six times more electric charge compared to the ones that are presently commercially available.

The study could accelerate the employment of rechargeable batteries and puts researchers of batteries a step closer to achieving two top stated objectives of their field.

One goal is to create a high-performance rechargeable battery that could allow mobile phones to be charged only once every week instead of every day, and the other, an electric vehicle that can travel six times farther minus any recharge. 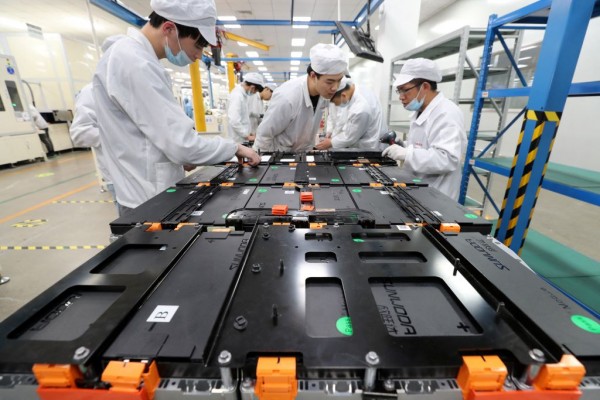 (Photo: STR/AFP via Getty Images)
This photo was taken on March 12, 2021, shows workers at a factory for Xinwangda Electric Vehicle Battery Co. Ltd, which makes lithium batteries for electric cars and other uses, in Nanjing in China's eastern Jiangsu province.

Called the alkali metal-chlorine batteries, these are developed by researchers led by Stanford chemistry professor of Stanford, Hongjie Dai, and directorial candidate, Guanzhou Zhu. They depend on the back-and-forth chemical conversion of lithium chloride or Li/Cl2, or sodium chloride or Na/Cl2 to chlorine.

When electrons travel from one side of a rechargeable battery to the other, recharging is reverting the chemistry to its original state to wait for another consumption. Non-rechargeable batteries do not have such luck. Once they're drained, their chemistry is not restorable.

A rechargeable battery, explained Dai, is slightly like a rocking chair. It's tipping in one direction, although rocking back when electricity is added. Describing the invention, the chemistry professor said, what they have is a "high-rocking rocking chair."

The reason no one had yet invented a high-performance rechargeable sodium-chlorine, or lithium-chlorine battery is that chlorine is very reactive, not to mention challenging to convert back a highly efficient chloride.

In certain circumstances, when and where others were able to attain some levels of the so-called "rechargeability," performance of the battery proved poor.

In fact, Zhu and Dai did not start out to develop rechargeable sodium and lithium-chlorine battery at all, though to enhance their existing battery technologies through the use of thionyl chloride.

The chemical is among the main ingredients of lithium-thionyl chloride batteries, a famous single-use battery type originally invented in the 1970s.

Nonetheless, in one of their early investigations that involved chlorine and sodium chloride, researchers at Stanford noticed that one chemical's conversion to another had, in one way or another, stabilized, resulting in some rechargeability.

Dai explained he did not think it was possible adding, it took them at least one year to realize what was happening.

Results of the study, Rechargeable Na/Cl2, and Li/Cl2 batteries, published in Nature, is a step headed for the brass ring of battery design, high-energy-density. So far, the researchers have achieved 1,200 milliamp hours per gram of positive electrode material.

A similar EurekAlert! the report said the commercial lithium-ion battery's capacity today, on the other hand, is up to 200 milliamps per hour per gram. Zhu said theirs has at approximately six times higher capacity.

In addition, the researchers imagine their batteries someday being used in situations where frequent recharging is not needed, like in remote sensors or satellites.

Related information about lithium-ion batteries is shown on Branch Education's YouTube video below: