New COVID-19 Variant Detected; Scientists Say It’s Too Early to Predict Its Evolution, Mutation, How Contagious It Is

The National Institute for Communicable Diseases recently said a new COVID-19 variant identified as C.1.2 was detected a week ago by South African scientists.

According to an Al Jazeera report, this new strain has multiple mutations although the scientists have yet to establish if it is more contagious or if it can overcome the immunity vaccines are providing, or if it is a prior infection.

The stain was flagged by the KwaZulu-Natal Research and Innovation and Sequencing Platform in a preprint study that hasn't yet been peer-reviewed.

Scientists at NICD said earlier today that this new COVID-19 variant existed only at very low levels and that it was quite early to tell how it might evolve. 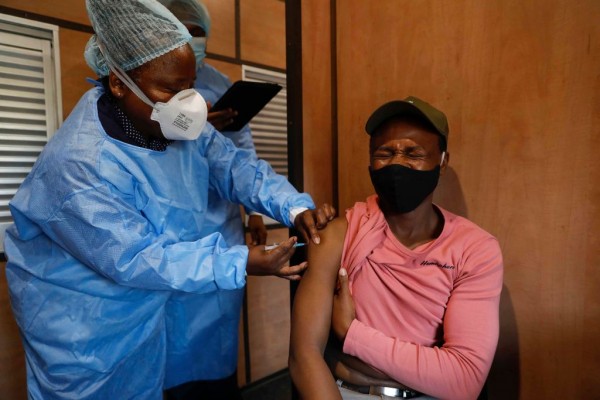 (Photo: PHILL MAGAKOE/AFP via Getty Images)
Researchers are currently studying how vaccinated and unvaccinated individuals are reacting to the newly detected C.1.2 variant.

Mutation 2X as Fast as Observed in Other Global Variants

While most of the COVID-19 cases in South Africa are presently caused by the Delta variant, initially found in India, C.1.2 caught the attention of scientists because they found that its mutation is nearly twice as fast as observed in other global strains.

Its frequency stays relatively low, though, and it has thus far been identified in less than three percent of genomes sequenced since its initial detection in May. However, the variant's frequency rose from 0.2 percent to two percent in July.

According to Penny Moore, a researcher at NICD, at this stage, they do not have experimental data to validate how the new variant is reacting in terms of sensitivity to bodies.

Nonetheless, the researcher explained that they have substantial confidence that the vaccines currently being rolled out in South Africa will continue to protect against severe infection and death.

C.1.2 Also Identified in Other Parts of the World

Deseret News reported, to date, C.1. 2 has been identified in all nine South African provinces and other areas of the world, including China, New Zealand, the United Kingdom, and Mauritius.

It is, nevertheless, not often enough to be suitable as a "variant of concern" or "variant of interest" like the highly infectious Delta and Beta variants, which arose late last year in South Africa.

Essentially, South Africa is the hardest-hit country in the continent, with more than 2.7 million COVID-19 cases reported up to now, of which more than 81,800 deaths have been reported.

A Daily News through Yahoo! News report said that according to the director of the National Institute for Communicable Diseases, Tulio de Oliveira, researchers are still studying how vaccinated and unvaccinated individuals react to the new variant.

It has only been identified in roughly 100 genomes, which is quite a low number, Oliveira explained. It is still quite a small percentage, although again, they are really keeping a good eye on that.

Describing C.1.2 variant, Oliveira added, "it has all of the signatures of immune escape." While it was earlier mentioned it was early to predict and confirm dome details about the new variant, researchers noted it has concerning patterns of mutations.

Report about this new COVID-19 variant is shown on Radio 702's YourTube video below:

RELATED ARTICLE: COVID-19 a Vascular Disease; New Study Reveals the Virus is Not a Respiratory Illness