The NASA satellite photograph released on Saturday shows that billowing smoke can be seen from orbit over Manhattan. Two hijacked planes slammed into the two World Trade Center buildings 20 years ago.

In a statement, astronaut Frank Culbertson said the smoke looked to have an unusual bloom at the base of the column pouring south of the city. Culbertson took the images from above the city. He assumed they were staring at New York around the time of, or shortly after, the second tower's fall after reading one of the news items they had just received. Then he said he knew the situation was awful.

According to the space agency, Culbertson stated in a public message following the 9/11 attacks that "the world has changed today." What he said or did is nothing in comparison to what occurred when the United States was assaulted.

From such a vantage point, the astronaut said, it was awful to witness smoke flowing from wounds in your own nation.

He remarked that the contrast between being on a spaceship committed to enhancing life on Earth and witnessing life destroyed by such intentional, awful crimes is jarring to the mind. 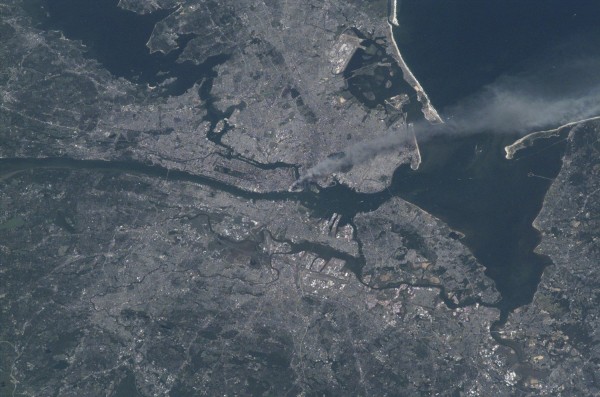 (Photo: NASA)
Visible from space, a smoke plume rises from the Manhattan area after two planes crash into the towers of the World Trade Center. This photo was taken of metropolitan New York City (and other parts of New York and New Jersey) on the morning of September 11, 2001.

NASA supported FEMA in New York in the days following the attack, in addition to commemorating and respecting the Americans who died that day. According to NASA's announcement on Saturday, they mourned the victims by giving their families flags flown onboard the Space Shuttle.

Following 9/11, NASA's ground research programs were in high demand, with the agency partnering with FEMA to fly sensors over devastated regions aboard planes in search of airborne pollutants, as well as employing satellite resources to monitor from above.

Students at the Johnson Space Center in Houston, Texas, put together the memorial gifts, which included U.S. flags flown in space and were sent to the victims' families. At a ceremony conducted at the American Museum of Natural History's Rose Center the Earth and Space in New York on June 14, 2002, National Flag Day, distribution began.

The people who built the tools for the Mars Exploration Rovers Spirit and Opportunity were unable to devote much time to assisting people in shelters or in other means to cope with the life-altering events of September 11.

Honeybee Robotics personnel in lower Manhattan were working on a pair of tools for polishing worn rinds off rocks on Mars so that NASA's Mars Exploration Rovers Spirit and Opportunity could investigate the rocks' innards in September 2001.

Still, they found a unique method to honor the hundreds of victims who died due to the 9/11 incident. The agency attached a metal from the World Trade Center towers that were embossed with an American flag.

Both spacecraft will be quiet one day, NASA said at the time. According to the space agency, the onboard monuments to victims of the September 11 attacks might last millions of years in the cold, dry conditions where they have functioned on Mars.