Experts recently said overblown apprehensions that COVID-19 infection could be spread through the surface have led to a stigma around trash management and handling, specifically personal protective equipment or PPEs, gloves, and masks. More so, some recyclable waste has been either junked or burned.

A New York Times report said, across Brazil, in particular, recycling plants ceased operations for several months. Then, in the capital of Indonesia, disposable face shields and gloves have piled up; this report also said, "at a river mouth."

Pouring plastic and packaging consumption during the pandemic has yielded mountains of waste. However, due to apprehensions about COVID-19 that have resulted in a work stoppage at recycling facilities, some recyclable material has been, as mentioned, either junked or burned instead.

All at once, high volumes of PPEs have been misclassified as harmful, solid waste, according to experts. The material frequently is not allowed into the standard trash; therefore, a lot of it is discarded as litter or in burn pits.

ALSO READ: 1.3 Billion Tons of Plastic Will Be in the Land, Air, and Sea by 2040 If People Don't Change Ways 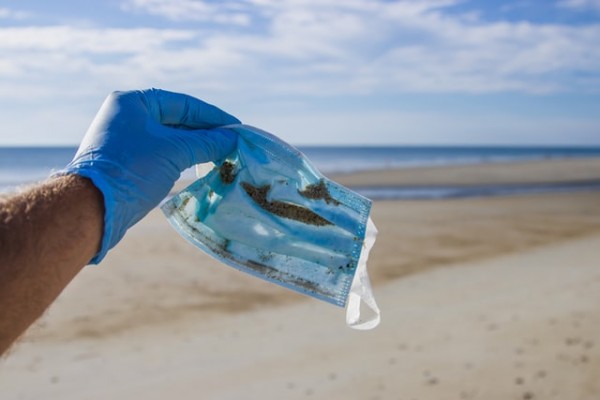 (Photo: Brian Yurasits on Unsplash)
Apprehensions that COVID-19 infection could be spread through the surface have led to a stigma around trash management and handling, specifically personal protective equipment or PPEs, gloves, and masks.

According to a Reuters report, there was a sharp drop in recycling rates worldwide a year ago, partly due to the fact that demand from manufacturers dropped.

In many nations where the recycling industry remains driven by hand sorting instead of machines, in-person was postponed out of fear of the virus.

For instance, in Brazil, the recyclable material generation in cities increased by 25 percent last year, mainly due to a spike in online shopping, the national association of sanitation companies, Abrelpe said.

Nevertheless, recycling programs in various cities were suspended for many months anyway, referring to fears of surface spread.

A recent study published in Nature Public Health Emergency Collection found that at least 16,000 fewer tons of recyclable material during the suspension period than usual were in circulation, representing an economic loss of about $1.2 million per month for waste-picker associations.

Syringes in the Wrong Place

An emerging concern is that, as the flood of materials develops new pressures on local officials, syringes on other truly harmful medical waste may end up in the wrong place.

In the poorest nations of the world, that would posture a health danger to waste pickers. More so, according to a solid waste expert in the capital, Dhaka, Mostafizur Rahman, tens of thousands of people are already scavenging in Bangladesh, for instance. However, just three or four of the 64 districts of the country have facilities to safely dispose of syringes.

An environmental sciences professor Dr. Rahman, at Jahangirnagar University, said these landfills are neither secure nor sanitary, and therefore, it is alarming when it comes to environmental health and safeguards.

And since syringes and vaccine vials are described as a "valuable commodity on the black market," criminal gangs have a motivation to steal gear for vaccination and illegally resell it into the health care industry.

In late 2020, Interpol cautioned that the pandemic had already stimulated exceptional opportunistic and destructive criminal behavior around the theft, fabrication, and illegal advertisement of COVID-19, as well as flu vaccines.

Such a warning arose came before the population of most of the world had even received a COVID-19 vaccine. It is an actual issue in the marketplace, said solid waste expert James Michelsen at the International Finance Corporation.

He added these vials have a significant black market value since one can fill them with whatever he wants and sells them.

Related information about PPEs' contribution to garbage crisis is shown on 1News's YouTube video below: