About 10 percent of the land worldwide would be underwater by 2100 when the Earth exceeds the 5.4 degrees Fahrenheit warming threshold or 3 degrees Celsius warming threshold. Climate change may bring us catastrophic heat and excessive drying phenomenon, but many people are not aware that it could also bring a massive increase in the current sea levels and flood the cities.

One of the devastating events expected to happen when greenhouse gas emissions proceed to pollute the atmospheric regions is for the cities to be buried underwater. The worst part of this problem is that the oceans of the planet could drown the landmarks by just notching the global climate up by a few degrees.

Climate Central's Visualization of the Future 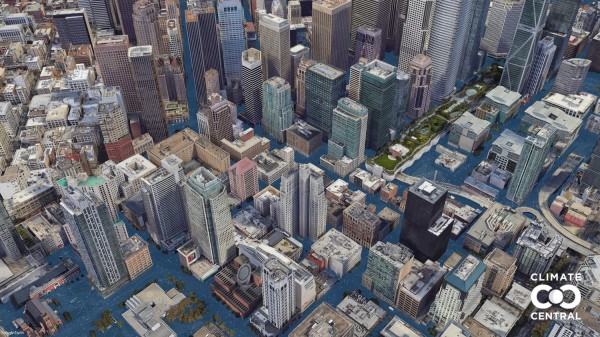 Climate Central, a nonprofit group that supports global climate advocacy, developed an image gallery and a map to show how the little increase in degrees in temperature could impact sea levels in the future. The gallery shows the condition of various landmarks across different countries which can be compared to its potentially unfortunate future. On the other hand, the map shows more than 100 coastal cities across the globe that could be drowned once Earth's atmospheric temperature increases in the following years.

The scenarios that Climate Central presented are the impending risks of the increase in sea levels increase. The alarming future of the landmarks presented in the gallery would be the product of our own doing. The human-induced activities will eventually melt the remaining ice sheets and expand the ocean water when the atmosphere exceeds the 3 degrees warming threshold.

The 1.5 degrees Celsius increase presented in the gallery will still flood up the entire planet, but that will be the best-case scenario and the last option humanity will ever have before jumping into the disastrous 3-degree increase. Even if we try to limit climate change in full effort and with strict measures, the planet will eventually get a 1.5-degree surge in temperature level if we missed a single problem that causes atmospheric warming.

The Climate Action Tracker published a study, titled "Global update: Paris Agreement Turning Point," regarding the matter. The research shows that if the human-induced greenhouse gasses continue to pollute the atmosphere, we will be reaching the frightening 3-degree temperature increase in just 79 years.

Climate Central's visualization was rendered regardless of the defense the cities may have against the sea level increase in the current time. Based on the authors of the gallery and the map's research source, many cities should prepare a solution as early as today to repel the negative effects of the massive waters.

The images and map that Climate Central produced were inspired by the study held through the collaborative effort of Princeton University, Columbia University, and the Potsdam Institute for Climate Impact Research. According to The Byte, the researchers noted that 10 percent of the where global population will be inflicted with an abnormally high tide once the planet warmed to 3 degrees Celsius.

Many regions such as those in low-lying terrain and small islands, may face worse effects and could be swallowed up by the ocean itself.Archipelagos located in Asia could drown due to climate change, and many coastal areas in the edges of all countries will definitely sink. The study was published in the journal Environmental Research Letters, titled "Unprecedented threats to cities from multi-century sea level rise."

RELATED ARTICLE: Research Shows Earthshine is Dimming for the Past Two Decades Due to the Shift in Global Climate; Planetary Scientists Linked Albedo with Pacific Decadal Oscillation