LunaNet: NASA is Trying to Establish Internet Connection on the Moon

LunaNet, NASA's 'internet' connection for the Moon and the Artemis missions, was created. The Artemis program of NASA intends to create a permanent human presence on the Moon. The worldwide moon program is the US's tip-of-the-sword in the new space race, but Artemis II has been suspended owing to a court battle over a NASA-awarded lunar landing module that Blue Origin has questioned.

NASA will launch Artemis I carrying an uncrewed Orion spacecraft to the natural satellite in November. According to the space agency (via Science Times), the first woman and first person of color will set foot on the Moon's surface following the Artemis missions. Artemis Base Camp, located at the Moon's south pole, is also a stepping stone to Mars and beyond. With so many moving components, having a dependable communications network would be a huge help.

How does a potential solution to establish Wi-Fi on the Moon address Cleveland's internet access inequalities?

ALSO READ: Elon Musk: Starlink Will Roll Out in the U.S. Soon; Should People Register to the Internet Service? 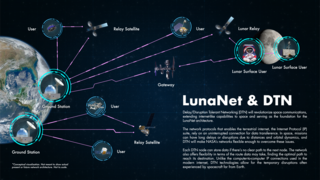 Academics, ground control, spacecraft, astronauts, and other users will all connect to the network regardless of their location. Rovers and astronauts on the Moon will be able to determine their location, map routes, enable autonomous movement, and arrange rapid returns to base via LunaNet navigation. Astronauts will also have access to real-time space meteorological data. LunaNet will notify astronauts to take refuge in the case of a hazardous solar storm. The internet connection will also help with search and rescue missions, scientific research, and radio astronomical studies. NASA will use LunaNet to conduct sophisticated space communications research for future missions. According to NASA, LunaNet is the major step toward building a Solar System Internet.

To jumpstart the construction of this new "lunar internet," AutoEvolution said NASA has issued the "Draft LunaNet Interoperability Specification." Industry professionals from across the world will hold technical talks after that.

The space agency will get a better understanding of space connection due to LunaNet and will be able to prepare for future trips to other alien worlds. NASA is laying the groundwork for astronauts to explore outer space by sending teams to the Moon. The Moon will be used as a testbed for technologies like LunaNet, which will aid humanity's journey to Mars and beyond.

EastMojo said NASA made the lunar component on Malapert Massif, a huge impact crater near the Moon's South Pole, as a lunar basecamp. This location satisfies NASA's Sun exposure and line-of-sight communications requirements with the Deep Space Network and is an excellent location for in-situ resource utilization.

LunaNet will require high-speed communications between astronauts and different parts like the Gateway, landers, homes, rovers, and more for surface exploration. While there isn't the same degree of interference on the Moon as there is in a neighborhood full of homes and trees, it also lacks the current power infrastructure, back feeds, and even a lunar internet, all of which must be supplied.

Using the same pole-based technique, the team suggests installing routers on several 24-foot poles linked to habitats, landers, or other big gear. Unlike a single, big tower, this technique would give network reliability to astronauts in space habitats while allowing mobile explorers to travel between routers.