Meteoroid Fireball Flies Over Mishawaka, Nearby Communities Ahead of Orionids Meteor Shower [WATCH]

News sources and witnesses reported a "strange fireball" suddenly flashed across the Mishawaka and other nearby communities early Wednesday. Residents - and experts - from all across the Midwest are speculating about what it may have been.

Unusual object sightings are nothing uncommon, but some seem to be giving what appears to be a flaming ball speeding across the sky an exceptionally high rating on the highly scientific fantastic scale.

After successful missions by private enterprise aerospace firms such as Blue Origin and Virgin Galactic, interest in space - and space travel - has grown. 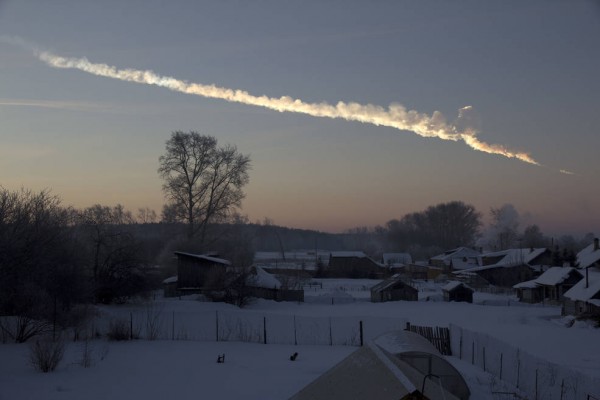 (Photo : Alex Alishevskikh via NASA)
This image of a vapor trail was captured about 125 miles (200 kilometers) from the Chelyabinsk meteor event, about one minute after the house-sized asteroid entered Earth’s atmosphere.

A local observed a meteor streak across the sky early Wednesday morning, according to WNDU (via Latest Breaking Video), which reported the celestial occurrence.

Jay Pock was walking through Mishawaka when he saw a fireball heading north. He also stated that it lasted for a few minutes before he became aware of the meteor.

ALSO READ: Melon-Sized Meteorite Crashes Through a Woman's Roof in Canada; What are the Odds of Getting Hit By a Space Rock?

Mike Kruse, who recorded the fireball and uploaded it to YouTube, dubbed it a "meteor above Trenton" in his video. It then inspired someone else to leave a remark on YouTube. According to one commentator, the video was the most amazing thing he had ever seen.

Meteors are extremely brief, lasting only a few seconds at most. These are almost certainly extremely tiny meteors. This one was a little bigger, and because it was descending through the atmosphere, it took a little longer to fritter away or become lost on the horizon. For those who witnessed the fireball last night, it was a truly spectacular sight.

According to WDIV meteorologist Paul Gross, the Orionid meteor shower is at its peak on Wednesday night, and the fireball might be a huge chunk of space rock that "burned up in the atmosphere."

According to EarthSky.com and Science Times, the Orionid happens every year between October 2 and November 7, as Earth passes through a stream of debris left behind by Halley's comet.

This meteor appears just as one of our regular meteor showers reaches its height. Sky gazers may observe Orionid Meteor Shower across the Northern Hemisphere. This occurs when the Earth travels through a section of the photovoltaic system containing dirt and debris from Halley's Comet. These particles fall through the Earth's atmosphere every year, creating spectacular streaks in the night sky. Science Times said the peak of the Orionid Meteor Shower would occur tonight, October 20 through October 21 this year.

In ideal viewing conditions, sky gazers should be able to observe around 20 meteors each hour. Regrettably, this year presents several difficulties. The first is that the Hunter's Moon will be full this night, making the sky incredibly gleaming from the full moon's brightness. The second issue is that clouds are forming ahead of possible rain showers.