NASA Orion spacecraft is ready to be connected to a rocket that will take it to the Moon later this year or early in 2022.

The space agency transferred the $12.2 billion next-generation spacecraft between facilities at Florida's Kennedy Space Center on Monday in preparation for its launch on the powerful Space Launch System (SLS) rocket.

Jerusalem Post said there would be no humans on board when the Orion launches. Instead, there will be only three non-human mannequins. The first, Commander Moonikin Campos, a full human stand-in named via an online ballot, will ensure that the ship itself is safe for people.

Artemis, named after Apollo's sister, might aid in the establishment of a long-term human presence on Earth's sole natural satellite.

Engineers had linked the spacecraft's launch abort system, which is meant to push Orion and its passengers away from the rocket if an emergency happens during a crewed launch, to another building on the same location.

Engineers have been building the 322ft (98m)-tall SLS launcher at the VAB since December 2020, and Orion is the final critical component to be hoisted aboard. 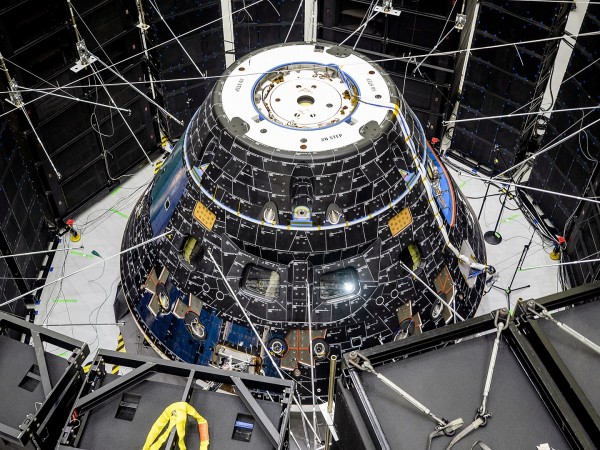 (Photo : Rad Sinyak / NASA via WikiCommons)
The Orion crew module for Exploration Mission-1 recently underwent Direct Field Acoustics Test where it was exposed to maximum acoustics levels that the vehicle will experience in space. Spacecraft response and sound pressure data were collected with microphones, strain gauges and accelerometers. The max decibel level was 141dB.

The abort motor will not be used for the Artemis 1 mission, but the jettison motor on the escape tower will fire after liftoff to push the structure away from the Orion spacecraft.

BBC said the three-week Artemis-1 mission will test the SLS and Orion before humans are permitted onboard for Artemis-2, which will orbit around the Moon in late 2023.

For the first time since the Apollo 17 mission in 1972, humans will land on the lunar surface during Artemis-3. According to Science Times, NASA has chosen Elon Musk's Starship to transport passengers from lunar orbit to the surface.

The landing mission is slated for 2024. But many experts believe that date will be pushed back. Senate also asked NASA to look for another aerospace company to build a lunar lander amid the legal fight of SpaceX and Blue Origin.

Earlier this month, the metal frame for the Orion spacecraft, which NASA will utilize for that trip, arrived at Kennedy Space Center. The Artemis-3 mission will transport the first woman and the next man to walk on the surface. The first person of color will travel to the Moon as part of the Artemis mission.