The whole SLS and Orion system may now be wheeled out to Launch Pad 39-B for a wet dress rehearsal. This is after NASA finished stacking its Orion crew capsule on top of its Space Launch System (SLS) rocket on Wednesday at Kennedy Space Center in Florida.

By the time NASA will fill the core stage with liquid hydrogen and liquid oxygen. The space agency will then conduct a practice countdown without firing the core stage's four RS-25 engines.

There is no fixed date for this, but it is the next stage in NASA launching the rocket into orbit. After that, NASA will need to bring the rocket back to the VAB to evaluate test data and make any last preparations before the launch. 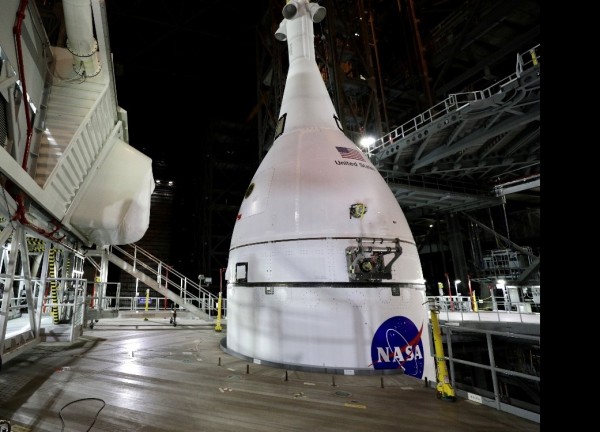 (Photo : Frank Michaux/NASA)
Teams with Exploration Ground Systems successfully lifted the Orion Spacecraft for the Artemis I mission inside the Vehicle Assembly Building on Oct. 20, 2021.

NASA'S next-generation spacecraft has been loaded onto the rocket that will transport it to the moon. According to the BBC, a crane hoisted Orion and then dropped it onto the top of the SLS inside Kennedy's cuboid Vehicle Assembly Building (VAB). The spacecraft was then firmly secured to its launcher by teams.

Engineers moved Orion to the VAB from another facility, which was kept on Monday to prepare for the procedure. It was the final major piece of hardware to be installed in the launch system before the intended test flight.

When Is The Artemis I Launch?

NASA Administrator Bill Nelson has been hedging his schedule pronouncements in recent months. He said the launch will occur by the end of this year or early next year.

At a Maryland Space Business Roundtable three weeks ago, NASA Associate Administrator Bob Cabana indicated the launch was unlikely to happen before the end of the year.

"We'll set an initial date after the team comes and briefs us on where we are," Cabana said per SpaceNews.com. "We'll be flying this Artemis 1 mission hopefully, more than likely, early next year," he added.

About Artemis I Mission

The Artemis I mission is a test flight without a crew, followed by a crewed Artemis II mission in 2023, which will orbit the moon but not land. For the first expedition since 1972, Artemis III intends to return people to the moon, with ambitions to include the first woman on the moon. The declared objective of NASA is to achieve this by 2024, although Nelson has noted that "space is hard."

In June, Nelson told a Senate committee (per Orlando Sentinel) that some uncertainty occurs and delays have been there, referencing the history of spacecraft and rocket development. He stated that everyone must be realistic about the issue. Nonetheless, he stated that the target date is 2024.