The famous Curiosity Mars rover recently captured alluring scenes from the red planet. The panorama included several colors that highlighted the structure of terrain that the rover shot. Experts made additional edits from NASA to uncover the hidden beauty of Mars. 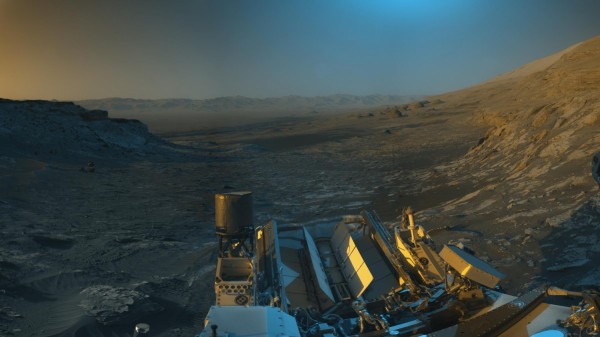 NASA's Curiosity rover captured the images during its venture on one of the high terrains of Mars called Mount Sharp. According to a CNET report, the scientists that oversee and manage the rover are so captivated by the view from the top of the landmass that they decided to combine the black and white images taken from the vicinity during the day and night. The result of the experiment revealed a panorama that could pass the standards of a rare postcard, and the image might just work as the best postcard ever from Mars to Earth.

The image from Mars was made possible through the help of Curiosity's ability to capture an entire area with its specialized camera. It is not the first time that the Curiosity rover captured such a marvelous sight, as it casually grabs every image possible every time it concludes an operation. The images taken by the rover are then being compressed into a considerable format and relayed to Earth in a small amount of quality.

However, the latest capture from Curiosity stunned the Curiosity team. It led the team to push for the highest quality that the rover's camera could get, regardless of the standard formatting that they routinely use. According to a report by the Jet Propulsion Laboratory, the scene was "just too beautiful" for the experts to let the image be cropped into a lower format.

The image from Mars' Mount Sharp was edited to give it life and color after it was captured. To do this, the experts took samples from one of the cameras equipped to Curiosity called the Mastcam device, an instrument that could take panoramic photographs in color and have much higher resolution than the basic navigation cameras.

Through the combined perspective from every camera available, the team put some additional gradients and shades on the image, topping it with green, blue, and orange colors. The photos that were combined to form the final product of the image were taken from specific times when the landscape features are most perceivable.

In the middle of the panorama, the landscape at the edge of Mount Sharp can be seen. Curiosity took the image when it sat in the same place that it usually drives through since 2014. Mars' Mount Sharp has a towering 5 kilometers of height, which allowed the rover to oversee every detail on the area. In the center part of the image, rounded terrains are noticeable. The same area was captured on a nearer perspective by Curiosity as part of a minor investigation over its mysterious changes. The far right of the image also included Rafael Navarro Mountain, an area named after one of Curiosity's team members that passed away in 2021.

RELATED ARTICLE: Experts Say Earth Could Have Saturn-Like Rings Made of Space Junk