As coronavirus infections soared across Europe and over vast parts of the United States, the head of the World Health Organization (WHO) warned individuals who had been vaccinated against complacency.

WHO Director-General Tedros Adhanom Ghebreyesus criticized "the false sense of confidence that vaccinations have halted the pandemic" on the night of Thanksgiving. Tedros encouraged everyone, including those who have been vaccinated, to keep wearing masks, keeping a safe distance, and avoiding crowds, stressing the "unsustainable burden" on many nations' health systems.

According to the Washington Post, new daily coronavirus cases in the United States have increased by 10 percent in the last week. In that time, deaths have climbed by 10 percent, while hospitalizations have grown by 4 percent. 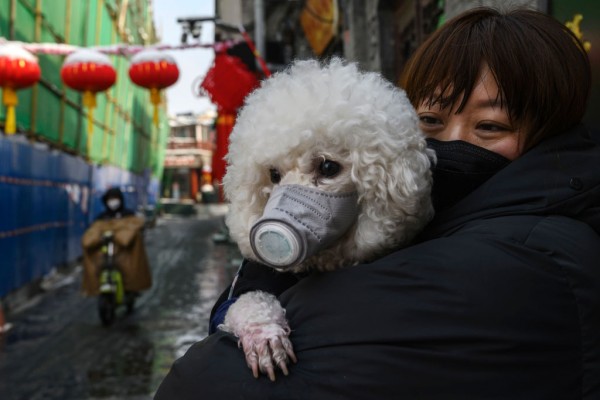 (Photo : Kevin Frayer/Getty Images)
BEIJING, CHINA - FEBRUARY 07: A Chinese woman holds her dog that is wearing a protective mask as well as they stand in the street on February 7, 2020 in Beijing, China. The number of cases of a deadly new coronavirus rose to more than 31000 in mainland China Friday, days after the World Health Organization (WHO) declared the outbreak a global public health emergency. China continued to lock down the city of Wuhan in an effort to contain the spread of the pneumonia-like disease which medical experts have confirmed can be passed from human to human. In an unprecedented move, Chinese authorities have put travel restrictions on the city which is the epicentre of the virus and municipalities in other parts of the country affecting tens of millions of people. The number of those who have died from the virus in China climbed to over 636 on Friday, mostly in Hubei province, and cases have been reported in other countries including the United States, Canada, Australia, Japan, South Korea, India, the United Kingdom, Germany, France and several others. The World Health Organization has warned all governments to be on alert and screening has been stepped up at airports around the world. Some countries, including the United States, have put restrictions on Chinese travellers entering and advised their citizens against travel to China.

WHO Notes 'False SenPse of Security' Around COVID-19 Vaccines

Ghebreyesus said that people from many nations and localities had mistakenly assumed that vaccines had terminated the pandemic. Data revealed that immunizations cut transmission by around 60 percent before the emergence of the Delta form, according to the WHO leader. The lowered transmissibility plummeted to 40 percent with the highly infectious variety, he noted.

The Delta version of the coronavirus has become the prevalent strain and has spread to many countries worldwide. According to Al Jazeera, Ghebreyesus advised that even fully vaccinated persons take steps to prevent being sick and transmitting the virus to those who may be susceptible to illness.

The crisis arose when Ghebreyesus declared Europe the newest epicenter of the coronavirus pandemic, citing an increase in cases. The region's healthcare systems and employees, he said, were under "unsustainable pressure."

ALSO READ: COVID-19 Delta Variant May End Soon As It Mutate Itself, Losing Capability to Replicate and Spread

Europe accounted for nearly 67 percent of the world's total new coronavirus cases for the week ending Nov. 21, totaling more than 2.4 million illnesses. According to the WHO's most recent weekly epidemiological bulletin, the statistics revealed an 11 percent increase from the previous week.

The WHO's office for Europe and Central Asia said on Tuesday that the two areas had a combined total of more than 1.5 million coronavirus fatalities. They cautioned that if the current trend continues, they might see 700,000 additional casualties by March 2022. According to CNBC, the worldwide organization predicts that most intensive care units in the region would suffer high or exceptional stress during the next four months.

Ghebreyesus' warning comes as the United Kingdom ramps up the delivery of booster doses to combat the virus's spread. Officials provided a total of 50,827,554 initial doses of the coronavirus vaccination, according to government records.

In a statement, Sajid Javid, the UK's health secretary, said that the UK's booster implementation was the "most effective" in Europe. Yahoo! News said the declarations came after infection rates in numerous region sections reached records on Wednesday.

Officials stated the region's vaccination effort has stalled, and warned that the United Kingdom would most certainly miss its immunization rate target by Christmas. According to Labour's shadow health minister Alex Norris, the number of persons vaccinated every day is insufficient to meet the aim of half a million.