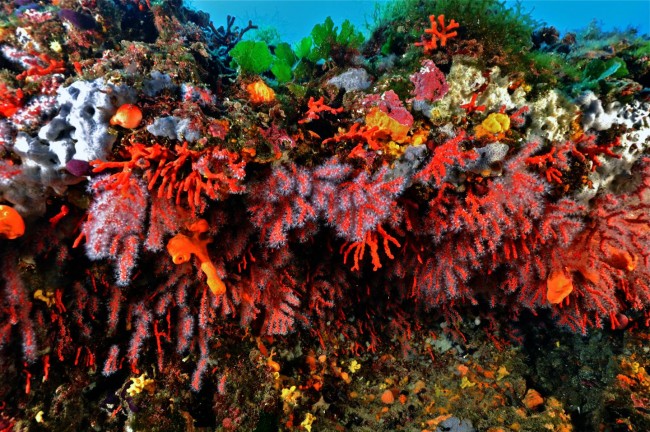 (Photo : These are red corals in the Mediterranean Sea.)

Protection measures of the Marine Protected Areas have enable red coral colonies (Corallium rubrum) to recover partially in the Mediterranean Sea, reaching health levels similar to those of the 1980s in Catalonia and of the 1960s in the Ligurian Sea (Northwestern Italy).

This is shown in a recent study carried out by researchers from the Institute of Environmental Science and Technology of the Universitat Autònoma de Barcelona (ICTA-UAB) that highlights the effectiveness of marine protections actions and recalls that the disappearance of red coral in the last decades has drastic consequences on its capacity to sequester sea carbon, and also to maintain complexity in its habitat, resulting in lower biodiversity.

Based on historical red coral data from the Northwestern Mediterranean Sea, the ICTA-UAB study documents how these colonies reached their minimum health status (the capacity of perpetuation of future generations, avoiding local extinction) in the decade of the 1990s, when the larger tree-like colonies were depleted due to their overexploitation. Although the implemented protection measures have proven to be effective, "these results have to be treated with caution, as they only reflect a part of the existing red coral population of the region", explains lead author of the study Miguel Mallo, who states that "in the most recent decades, the vast majority of red coral studies, and thus, data available, were concentrated in few areas coinciding with Marine Protected Areas, leaving unstudied the colonies of other locations that do not benefit from protection measures, with worse health status".

Results from this work also present the dynamics of the carbon sequestration capacity of red coral, being halved in only a few decades and thus highlighting the consequences of direct harvesting of this slow growing species. "The very slow growth and low reproductive rates of red coral, combined with its continuous harvest and intense periods of overexploitation, makes the majority of the actual red coral small in size and unable to do its function in the habitat, thereby affecting several species", highlights Sergio Rossi.

The Mediterranean Sea is considered one of the main marine biodiversity hotspots worldwide, as well as one of the most pressured seas by human activities since ancient times. Most of the impacts are concentrated where the highest amount of marine biodiversity exists: on the coastal marine habitats within the zone that sunlight penetrates.

The main habitat representatives of such biodiversity are the seagrass meadows and the coralligenous: calcareous formations of encrusting corals and algae. Iconic Mediterranean species such as red coral, a cnidarian semi-endemic of the Mediterranean, with a hard and striking red skeleton, is key for these habitats, as it gives it physical structure, increases its complexity and serves as protection for several species that feed on the coralligenous habitat. It is comparable to the function that trees have in forests.

Unfortunately, since ancient times (the oldest evidence of its use by humans dates back 30,000 years), numerous civilizations have used the precious red coral skeleton to make jewels, ornaments, and trade; some even believed that when ingested, the red coral could increase fertility, healing or other spiritual endeavours. The main disadvantage suffered by this species is its commercial value and indeed, its historically heavy harvesting for the jewellery sector.

The type of data used for this historical ecological study were obtained from multiple sources (quantitative and qualitative, academic and non-academic) conducted through the internet and libraries, especially in the Biblioteca Carles Bas i Peired (CSIC-CMIMA, Barcelona) and the Bibliothèque du Laboratoire Arago (BUPMC, Banyuls-sur-mer).

"This work stresses once more the urgent need of protection measures in Mediterranean marine biodiversity hotspot areas, to improve the resilience and adaptation of key endemic systems. The positive note is that the protection measures can be effective relatively quickly. This is important because it gives to these ecosystems greater capacity to resist and recover following climate events in this rapidly changing Mediterranean Sea", ICTA-UAB researcher Patrizia Ziveri commented. In addition, this new data also shows the contribution of red coral to carbon storage and the consequences that their disappearance has on increasing atmospheric carbon emission.