Younger people have shown lower faith in a democracy compared to any other age group - with millennials all over the world more disillusioned than their predecessors at the same stage in life.

A report from the University of Cambridge's Centre for the Future of Democracy details how most of the global regions show that it's 18-34 demographic exhibited the sharpest decline in terms of believing in democracy.

On the other hand, young people are most optimistic about democracy under populist leaders - either left and right. The report also noted that millennials living in advanced democracies are more likely to dismiss their political opponents as "morally flawed." 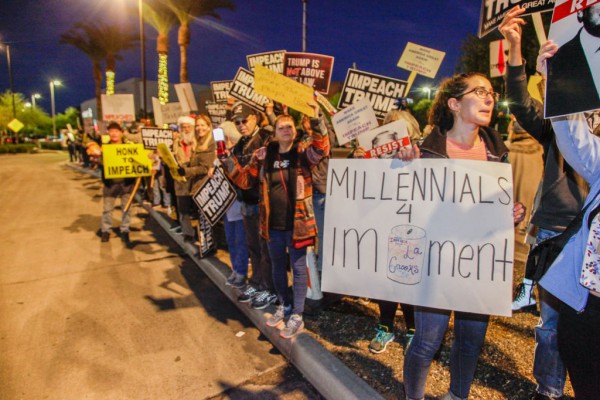 (Photo: Photo by Jason Wise/Getty Images for MoveOn.org)
PHOENIX, AZ - DECEMBER 17: Maria Eller of Phoenix, with millennials sign, attends the "Nobody Is Above The Law" rally on December 17, 2019, in Phoenix, Arizona.

The Largest Inquiry in Democracy

The Cambridge University research team worked with the HUMAN Surveys Project - a group that uses public opinion surveys to earn insights on global public opinion - to conduct the study. Together, they were able to create what appears to be the largest-ever global study on the legitimacy of democracy as a social institution.

RELATED: University of Cambridge Commits to Full Divestment in the Fossil Fuel Industry

It covered almost five million respondents, from more than 160 countries around the world, gathering data from 1973 to 2020. Respondents in the study were asked about how satisfied they were with the democracy in their respective countries.

"This is the first generation in living memory to have a global majority who are dissatisfied with the way democracy works while in their twenties and thirties," said Dr. Roberto Foa, from the Department of Politics and International Studies at Cambridge and lead author of the report, in a press release from the University. He added that by their mid-thirties, more than half - or 55 percent - of millennials around the world are dissatisfied. In comparison, according to Dr. Foa, only less than half of Generation X shares the same sentiment. Baby boomers, generally placed as those born between 1946 to 1964 and now in their sixties and above, are generally satisfied with democracy.

A Global Trend of Declining Satisfaction

However, millennials, by the time they reached 30, only saw a 48 percent share of people satisfied with democracy.

RELATED: Millennials Here's Why Grandpa and Grandma Keep Beating You in Word Games Even if You Think Your Minds are Sharper Than Them

The same pattern was observed in the United States. About sixty-three percent of American millennials reported satisfaction with their democracy by their twenties. However, after a decade, it has fallen down to fifty percent. It pales in comparison to almost three-in-every-four, or 74 percent, boomers in the US satisfied with American democracy, with two-thirds, or 68 percent of them remaining satisfied for the following years.

This pattern is consistent with the "Anglo-Saxon democracies," or those in the United States, United Kingdom, Canada, Australia, and New Zealand. Other regions also showed a general decline, marked by a divergence of millennial data compared to baby boomers and Gen Xers - Latin America, Sub-Saharan Africa, and Western Europe corresponding to the same pattern, albeit at different slopes.

Check out more news and information on Democracy in Science Times.