Ouroboros Steak, beef made from human cells, just criticizes the sustainability arguments of the cell-based meat industry. Yet it's hard to disregard the undertones of cannibalism.

This is becoming ludicrous. Name it painting, mediation, philosophical speculation, whatever. The latest show shows Ouroboros Steak at London's Architecture Museum. It's meat dependent on cells. Crafted from the cells of, wait for, people.

Ouroboros Steak has been nominated for a Design Museum product design contest. And though it speaks volumes in a (hopefully) tongue-in-cheek way about the expansive technical breakthroughs and revolutionary thought processes behind alt-meat, it's not a food future that many would like to see. It is NOT supposed to be consumed unless you want to try it.

The idea is the brainchild of Andrew Pelling, Grace Knight, and Orkan Telhan. It first appeared at the Philadelphia Museum of Art. Human cell-based meat is meant to be a critique on the environmental protection arguments of the broader cell-based meat industry.

Cell-based/cultivated/lab-grown/in vitro/clean meat has been screaming to the peak of the alt-meat market. Its creation was quick, monumental and well-documented. And it's not impossible to understand why you're not destroying an animal practically, and, apparently, it's far safer for the climate.

According to a Metro report, The Ouroborous Steak is named after the Egyptian symbol of a snake swallowing its own tail.

The "human steak" was created based on the experts' study to ask the cultured meat industry a query that has long relied on a liquid known as fetal bovine serum (FBS), which is a protein-rich growth liquid used for cell cultures and obtained from calf fetus blood.

Since slaughtering their pregnant mothers for the meat industry, FBS is acquired from the fetuses, and it can cost up to more than $900 per liter.

For a long time, the cultured meat sector has been in a tense position, with several academics criticizing it for apparently encouraging environmentally destructive industries, with critics pointing to their usage of FBS.

A Frontiers study indicated it could be more climate-friendly. But before making any predictions regarding the longer-term consequences, there is a long way to go. 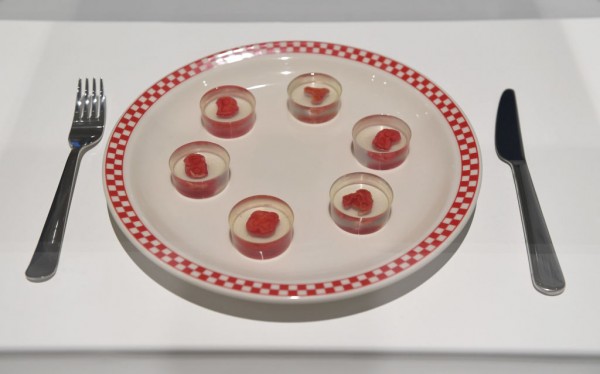 The Debate Around Lab-Grown Meat

Andrew Pelling, a scientist and creator of the Ouroboros Steak, said in an interview with Dezeen that fetal bovine serum costs significant amounts of money and animals' lives. Although some lab-grown meat companies claim to have solved this problem, no independent, peer-reviewed, scientific studies have validated these claims to our knowledge.

The Ouroboros Steak may be grown from the cells within your cheeks that are scraped. But the ones on the show are created from tissues purchased from the American Tissue Culture Stock, then fed with a serum made from old donated blood-growing without needing FBS.

"Growing yourself ensures that you and your loved ones always know the origin of your food, how it has been raised and that its cells were acquired ethically and consensually," a website for the imagined product states.

The human steak is a thought-provoking piece of art discovered at present in the showcase of the Beazley Designs of the Year. But it is also true beef that can be consumed.

“Cooking is all about people. Food is maybe the only universal thing that really has the power to bring everyone together. No matter what culture, everywhere around the world, people get together to eat”, Guy Fieri#cultivatedmeat #cleanmeat #kitchentissueengineering pic.twitter.com/R0gdC5jkJ5 — ourochef (@ourochef) October 18, 2019

Soon enough, the people behind the project want the public to engage in growing their own Ouroboros steak with a DIY pack, with tissue they can take from their own cheek, and then creating them using mushroom mycelium scaffolds. According to the guidelines for producing these human steaks, they need to be kept in a warm position for three months until they can be completely developed and ready for consumption.

So if you eat anything that's made up of your own body and dried human food, is it cannibalism? Many would believe so, but it's not, obviously. Grace Knight, an architectural designer who helped with the project, said the project is legally not cannibalism. Expired human blood is healthier and more economical than FBS, but less tolerated as it is known in the medical system to be waste material.

“Tell me what you eat, and I will tell you what you are.” – Anthelme Brillat-Savarin pic.twitter.com/xvcInFamAr — ourochef (@ourochef) October 17, 2019

Lab-grown meats are not licensed for human consumption as of yet.

ALSO READ: This Startup Is Growing Sushi-Grade Salmon From Cells in a Lab