NASA's hot fire test - the final test for the SLS Green Run - was cut short by an engine shutdown, with the planned eight-minute trial run lasting for a little over a minute.

The Space Launch System, which is set to bring humans back to the moon under the Artemis program, was subjected to an eight-part test to test all rocket's core stage systems and functionalities.

At NASA's Stennis Space Center in Mississippi, the test control team originally planned to roar the engines to life for about eight minutes - the same amount of time to launch the future missions to the moon. 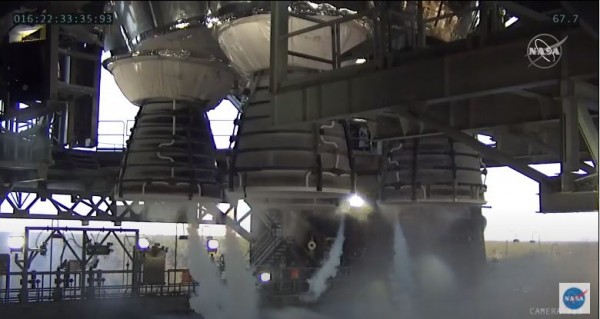 In the last step of the Green Run tests, the SLS Core Stage is mounted at the B-2 Test Stand, over a flame deflector chute. According to the plan, at T-25 minutes, the deflector valves start letting the water in. At around one minute and 35 seconds remaining, the water flow into the chute is expected to be 100% capacity, equivalent to 240,000 gallons of water flowing per minute.

The test runs are planned to test the core stage's four RS-25 engines - liquid-fuel cryogenic rocket engines that will propel the SLS - as well as its propellant tanks, computer systems, and flight safety. This process will also check the engine's gimballing, testing the hydraulics as the engines move and orient themselves during flight.

While the hot fire did not last as long as expected, an allotted 100 terabytes of data for engineering analysis and more than 1,400 sensors provided NASA with crucial data in taking the next steps toward the first Artemis missions. The core's temperature, vibration, stress, acoustics, and other specs were closely monitored and recorded during the test.

According to the NASA live stream, the core stage will be lifted out of its test stand and refurbished. Afterward, it will be loaded to a Pegasus barge - a large, football field-sized transport - to carry the core stage on a six-day trip from the Gulf of Mexico to the Kennedy Space Center in Florida. Upon reaching its destination, it will then be integrated with the other parts of the SLS: the boosters and the upper stage.

Described as the "first step in the next era of human exploration," the Artemis mission aims to send the next man and the first woman on the moon. Data gathered from these flights would be used to establish a sustainable lunar presence in preparation for the next step: missions to Mars.

The SLS Core Stage will be used to propel the Orion spacecraft, partially reusable space capsules that would soon carry astronauts back to the moon and beyond.

In a press release last year, NASA announced through the Artemis Plan document the estimated costs associated with the Exploration Systems Development, Artemis I to III Space Missions, Human Landing System (HLS), and other related projects to be close to $28 billion, with $16 billion alone going to the HLS.

Check out more news and information on Artemis Mission on Science Times.