NASA underwent a final and successful hot-fire evaluation of the Space Launch System (SLS) rocket's core stage that would launch the Artemis astronauts into space on their way to the moon. 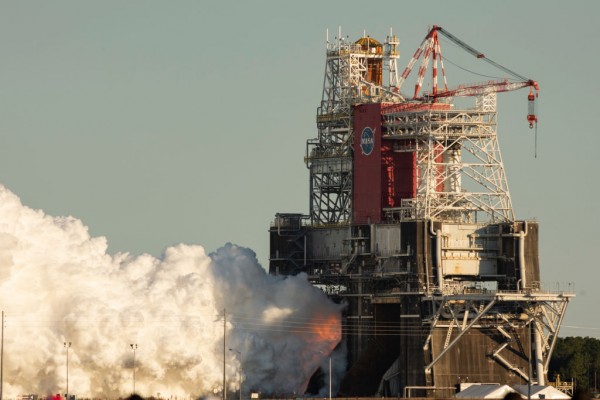 The eighth and final test in the Green Run sequence was performed to ensure that the rocket will launch Artemis missions in 2024, land the first woman and the next man on the moon. The uncrewed Artemis I mission is set to launch in November. These experiments will help address concerns about how the rocket can do at various launch process stages.

NASA and its prime contractor, Boeing, said per BBC before the test that they only wanted to fire the engines for four minutes to get the data they needed to continue with the Space Launch System's first launch after years of progress. However, when bolted down to a stand at NASA's Stennis Space Center in Mississippi, the RS-25 engines could replicate an entire flight, burning through 733,000 gallons of fuel.

The mission control center erupted in cheers after the engines were turned off. NASA officials expressed optimism that the test met all of its objectives and would pave the way for the first flight of a rocket capable of launching humans to the moon in more than five decades.

Bill Wrobel, NASA's manager of the test campaign, told The Washington Post there's "a lot of data" that needs to be processed right now.

He said the engineers would determine what succeeded and what did not and what needs to be tweaked and what does not. Wrobel, though, claims the applause shows a lot of how the staff feels. He said that they passed the test and that all is looking positive right now.

"The SLS is the most powerful rocket NASA has ever built, and during today's test the core stage of the rocket generated more than 1.6 million pounds of thrust within seven seconds," said acting NASA Administrator Steve Jurczy.

He told CNN that today's successful hot fire test of the SLS core stage is a significant achievement in NASA's quest to return humans to the lunar surface and beyond.

The acting NASA administrator added the SLS is an impressive technological achievement and the only rocket capable of supporting America's next-generation missions that will put the first woman and the next man on the moon."

What SLS Rocket Consists Of

According to the department, the central stage consists of four engines, a liquid hydrogen tank, a liquid oxygen tank, and avionics (computers and electronics that act together as the rocket's "brains" to power the first eight minutes of flight).

In the days leading up to the drill, 18 to 20 tanker trucks loaded with propellant filled six barges with liquid oxygen and hydrogen. To fill the key stages, they towed the barges to the B-2 rocket stand.

The second test lasted eight minutes and gave the teams the details they wanted. Since they issued the order to shut it down after eight minutes, the control room erupted in applause. There was no justification for an early shutdown.

During the simulation, the engines were subjected to three separate power stages as well as gimballing, which simulates flight steering.