After 900 Years: Icelandic Volcano Erupts, Posing No Threats to Locals

Experts say that the volcanic eruption near Reykjavik, Iceland that spewed lava after waking for the first time in roughly 900 years, appeared to be subsiding and posing no danger to locals. 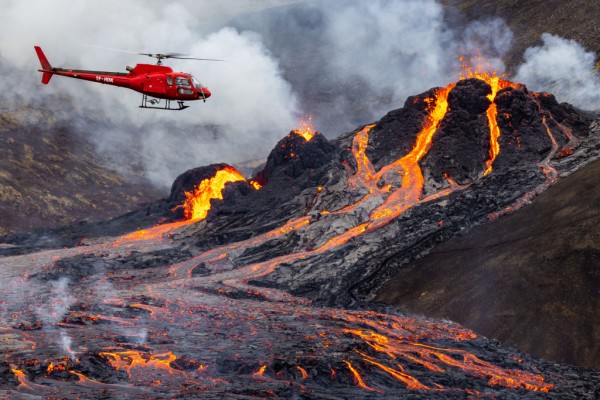 (Photo: Photo by Vilhelm Gunnarsson/Getty Images)
FAGRADALSFJALL, ICELAND - MARCH 20: (ICELAND OUT, no archiving and no use after 26th March 2021) A helicopter flies close to a volcanic eruption which has begun in Fagradalsfjall near the capital Reykjavik on March 20, 2021, in Fagradalsfjall, Iceland. On Friday the Icelandic meteorological office announced a volcano, referring to a mountain located south-west of the Capital Reykjavik has erupted after thousands of small earthquakes in the area over the recent weeks. A no-fly zone has been established in the area.

Streams of fiery red lava bubbled and curbed out of a fissure in the Geldingadalur valley close to Mount Fagradalsfjall on the Reykhanes peninsula, southwestern Iceland.

As lave flowed steadily under rain showers on Saturday, a blue gas plume and vapor cloud were seen from the site, 40 kilometers from the capital and the popular tourist destination--the Blue Lagoon geothermal spa.

The long-awaited eruption began on Friday at about 20:45 GMT, lighting up the night sky with a fiery crimson glow as hundreds of small volcanic earthquakes shook locals.

Iceland's Keflavik International Airport and a small fishing port in Frindacik a few kilometers away were uninhabited, Reykjavik's volcanic eruption posed no danger to the public.

The Icelandic Meteorological office that monitors seismic activity said in a statement that the eruptions are considered small, with most volcanic activity decreasing since yesterday evening.

The agency says that the eruptive fissure was approximately 500-700 meters wide. Adding that the lava rea was less than a kilometer with small lava fountains spewing.

Magnus Tumi Gudmundsson, a geophysicist at the University of Iceland described to reporters that the valley was an "ideal" spot for Reykhavik's volcanic eruption, comparing it to a "bathtub" which the lava can steadily leak into.

Kristin Jondsottir, IMO earthquake hazards coordinator says that there is a high chance that the eruption will last for a few more days.

Friday's eruption in the Krysuvik volcanic system -- which doesn't have a central volcano-- was roughly 5 kilometers inland from the southern coasts of Iceland. Sigurdur Kristmundsson, a 54-year old port official in Grindavik tells AFP that since the eruption posed no threat to the health and lives of the locals, people were exhilarated by the eruption. 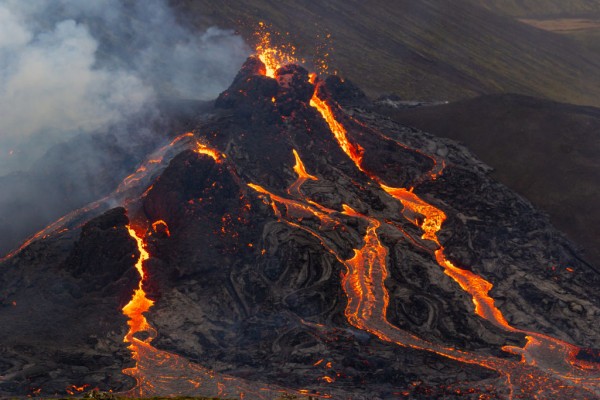 (Photo: Photo by Vilhelm Gunnarsson/Getty Images)
FAGRADALSFJALL, ICELAND - MARCH 20: (ICELAND OUT, no archiving and no use after 26th March 2021) A volcanic eruption has begun in Fagradalsfjall near the capital Reykjavik on March 20, 2021, in Fagradalsfjall, Iceland. On Friday the Icelandic meteorological office announced a volcano, referring to a mountain located south-west of the Capital Reykjavik has erupted after thousands of small earthquakes in the area over the recent weeks. A no-fly zone has been established in the area.

Access to the area was blocked and later re-opened to the public, with Iceland's Department of Civil Protection and Emergency Management stressing that the several-hour hike from the nearest road is recommended only for those used to difficult outdoor conditions.

Gases such as sulfur dioxide from volcanic eruptions can be elevated within close proximity of the initial eruption and may pose health dangers which can also be carried by the wind.

The IMO says that currently, gas pollution isn't expected to cause discomfort to people except close up to the source of the Icelandic eruption. The agency will continue to closely monitor gas emissions.

The Krysuvik System, according to the IMO, has been inactive over the past 900 years. The last eruption of the Reykjanes peninsula was recorded roughly 800 years ago that lasted for almost 30 years from 1210-1240.

On the other hand, the region has been closely observed for several weeks after a 5.7 magnitude earthquake was registered back on February 24 near Mount Keilir.

Gudmundsson explains that the Icelandic eruption signals a new period that may last centuries of eruptions, possibly 10-100 years apart.

Check out more news and information on Volcanoes on Science Times.