Przewalski's horses: Rare, endangered, and the last known species of wild horse, have been found to be alive and thriving in the lands of Chernobyl - more than thirty years after a nuclear disaster turned it into a radioactive wasteland.

A study from the Savannah River Ecology Laboratory (SREL) at the University of Georgia notes how the rare wild horse species used the abandoned buildings and villages at the Chernobyl Exclusion Zone for their own shelter, creating an unlikely habitat that helped the Przewalski's horses repopulate.

They first presented their findings in the article "Use of abandoned structures by Przewalski's wild horses and other wildlife in the Chernobyl Exclusion Zone" in the journal Mammal Research. 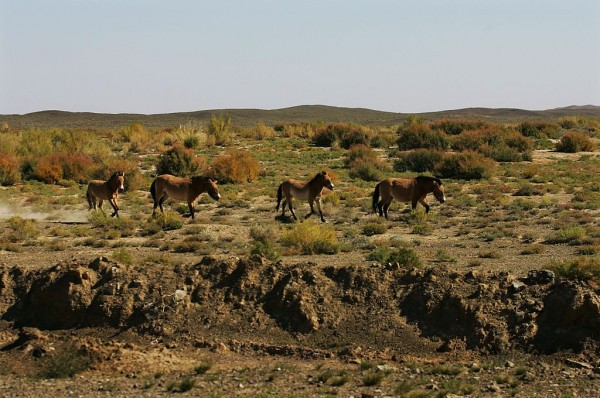 (Photo: Photo by China Photos/Getty Images)
JUNGGAR BASIN, CHINA - SEPTEMBER 16: (CHINA OUT) Przewalski's horses run at the gobi desert on September 16, 2007 in Junggar Basin of Xinjiang Uygur Autonomous Region, China. The Junggar Basin is one of the last places where Przewalski's horse (Equus przewalskii) was known to survive in the wild. After over two decades of hard work, Chinese scientists has finally managed to restore the population of Przewalski's Horses to some 300 in Xinjiang. Of these, 24 were imported from Germany, 252 were born in the local Wild Horse Protection and Breeding Center, and another 24 were born in the wild.

Life in a Ghost Town After the Incident

In the early hours of April 26, 1986 in Northern Ukraine, then a part of the USSR, an explosion caused a nuclear meltdown, destroying its core first then the building next. It released a nuclear chain reaction and subsequent emergency and decontamination response involved more than 500,000 personnel and cost the Soviet Union about 18 billion rubles, or $242 billion in today's money.

In its wake, 19 miles (30 kilometers) of land surrounding the Chernobyl Power Plant has been cordoned off and placed under military control.

While the area remains uninhabitable to humans, a variety of flora and fauna have been reported thriving in the unexpected nature reserve - taking over the abandoned structures and villages originally meant to house the employees and families of the Chernobyl Power Plant.

ALSO READ: Chernobyl Fungi Can Be Natural Radiation Shields for the ISS

"Our results indicate Przewalski's horses routinely use abandoned structures in the CEZ," said James Beasley, an associate professor at SREL, in a news article from the University. He adds that as a result, the structures serve another new purpose - this time for study - that could offer additional insights on the conditions of the horses on the site.

Also known as the takhi, Mongolian wild horse, and the Dzungarian horse, the last wild horse species are originally endemic in the Central Asian steppes. While other existing horses today are also described as "wild," like American mustangs or Australian brumbys, these are only wild and feral horses that still descended from once-domesticated ancestors who might've escaped or released into the wild and adapted into it.

Przewalski's horses, on the other hand, have long been known to be the only non-domesticated species of wild horse - until a 2018 DNA study on the wild horse species suggests that they might also be descendants of horses domesticated by the Botai culture, in prehistoric Kazakhstan.

Formally designated as Equus ferus przewalskii, these horses are named after the Russian geographer and explorer Nikolaj Przewalski who first described the short, muscular horses with coats ranging from beige to reddish-brown, which were then previously unknown to the Western world.

These horses were declared to be "extinct in the wild" sometime after 1968, when an earlier series of expeditions looking for these Przewalski's horses bore no fruit. However, local farmers report sightings, although only at a distance, continued afterward.

The specimens captured in the decade being the only representative proof of their existence for the following year, with genetic diversity from the captured ones leading to increased reproductive success rates.

In 1992, 16 members of the rare population were reintroduced in the wild in Mongolia. Although endangered, the Prezwalski's horses saw a steady increase in their population in 2011 and in 2018.

Check out more news and information on Chernobyl in Science Times.