Chernobyl Apple Spirit Drinks Confiscated in Ukraine, Why Are They Not Safe for Consumption

The first batch of ATOMIK apple spirit, distilled from apples growing inside the Chernobyl Exclusion Zone was seized in a recent Ukrainian Secret Services investigation.

A press release from the Chernobyl Spirit Company, a "social enterprise" based in the UK, explains that 1,500 bottles of Atomik apple spirit were seized last March 19 and has since been taken to the Kyiv Prosecutor's Office in the Ukrainian capital. The bottles were caught from a track at a distillery located in the Carpathians.

Additionally, developers of the apple spirit from the Chernobyl Exclusion Zone say that the reason behind the move remains "unclear" to them. However, Professor Jim Smith, founder of the Chernobyl Spirit Company, explains that it seems like the Ukrainian government is "accusing us of using forged Ukrainian excise stamps, but this doesn't make sense since the bottles are for the UK market and are clearly labelled with valid UK excise stamps".

"We are working hard to set up a business to help bring jobs and investment to the Chernobyl affected areas of Ukraine and to further support the community with 75% of any profits we make," Smith added in the company press release.

Elina Smirnova, the lawyer representing the makers of the Atomik apple spirit, says that the authorities behind the confiscation are in violation of Ukrainian Law, targeting a foreign company that aims to establish an ethical business to help Ukraine recover. 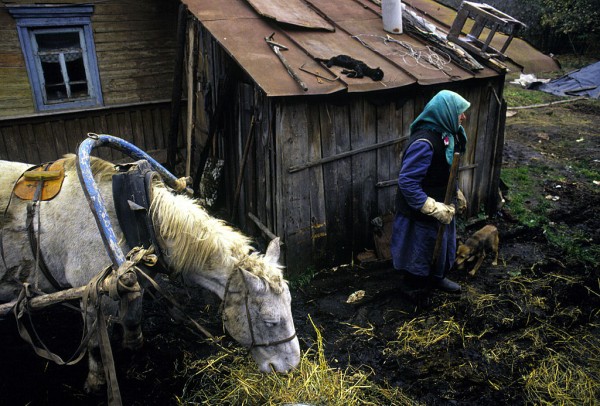 (Photo: Photo by Yuri Kozyrev/Newsmakers)
An old woman works in her garden on December 11, 2000, near the Chernobyl power plant in Ukraine. Chernobyl, the site of the world's worst nuclear disaster, was closed down for good Friday, December 15, 2000.

Also known as the "30 kilometer zone" or simply "The Zone," the large military-guarded parameter was established shortly after the infamous 1986 Chernobyl incident. The meltdown on the No. 4 Reactor of the Chernobyl Nuclear Power Plant soon turned around a thousand square miles of the area around Chernobyl to be contaminated with radioactive materials and remains so even after more than 30 years, according to environmental nonprofit Greenpeace.

The Chernobyl Spirit Company also notes that scientists have focused efforts on understanding the consequences of the Chernobyl incident and to support Ukraine's long recovery from the incident.

"We hope this issue can be resolved so that we can continue our work trying to help people affected by the devastating social and economic impacts Chernobyl had on communities," said Dr. Gennady Laptev, a member of the Ukrainian National Academy of Sciences and a Chernobyl "liquidator" or one of the first responders after the incident, in the company statement.

Distilled Products from Chernobyl Produce, Are They Safe?

Studies on the flora and fauna of the Chernobyl Exclusion Zone confirm that produce growing on the site remains radioactive, including apples, at levels still dangerous to humans. However, scientists behind the Chernobyl Spirit Company demonstrated how distillation could create an alcoholic drink safe for human consumption.

In the technical report "Distillate ethanol production for re-use of abandoned lands - an analysis and risk assessment," Jim Smith from the University of Portsmouth worked with Ukrainian scientists to evaluate the transfer of radioactive particles to crops in the exclusion zone and later to distilled ethanol. Researchers report that the extracted ethanol had lower levels of cesium, strontium, americium, and plutonium isotopes - radioactive materials that contaminate the Chernobyl Exclusion Zone until today - with Pu and Am isotopes dropping below detection limits.

Additionally, the water used in diluting the apple spirit down to a 40 percent alcoholic drink was taken from a mineral water source from an aquifer deep within the ghost town of Chernobyl. They compared the quality of this water to the South of England or the area of Champagne in France.

Check out more news and information on Chernobyl in Science Times.